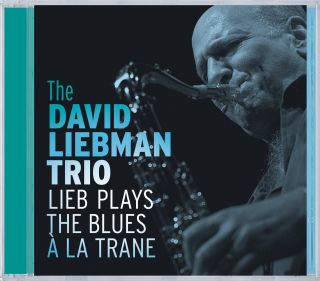 Catalog number: DBCHR 75978
Releasedate: 03-09-10
When Trane played the blues you really GOT IT, according to Liebman. The same we can say for him and his trio in this great blues-homage to John Coltrane. This is recorded at a live concert, which turned out to be splendid material for a new record!
David Liebman: soprano and tenor saxophones
Marius Beets: bass
Eric Ineke: drums

"The trio was on tour playing Kurt Weill and Alec Wilder compositions from
our two releases on Daybreak. Arriving at this small club in Belgium and feeling a bit under the weather, I felt that we should play something different. As I try to do on these occasions, I like to have at least the thread of a story line for a night’s repertoire. Why not play some blues played or associated with John Coltrane? Thanks to Kris Roevens and with some additional sound reinforcement from Marius, to our surprise we came out with a CD worth of music without planning it at all.

For many years till the late ‘80s, with a few exceptions, I purposely refrained from recording Coltrane tunes for the obvious reason that I needed and wanted to escape his titanic (and positive) influence on my life and music. It is well known among those who have heard me speak in classes or interviews that seeing Trane live in the ‘60s was my epiphany. By the late ‘80s I felt ready to tackle it somewhat of my own terms, which I did on “Homage To Coltrane” (Owl Records) in 1987 and have recorded several Trane compositions since then, especially from the late period. In the case of this CD, the vibe was to just play the music for an evening and have fun. With such a strong bass-drum team as Marius and Eric are, I knew that whatever transpired it would certainly swing… so no arrangements, just the heads and blow. There is nothing new contained herein but it does reflect the absorption of years of study of Trane’s music and a kind of homage to one particular aspect of his massive style."  - Dave Liebman in the linernotes on this cd.


David Liebman’s career has spanned over four decades, beginning in the early ‘70s with his "apprenticeship "period performing and recording in the groups of drummer Elvin Jones ("Live At The Lighthouse") and Miles Davis ("On The Corner"). Since then he has lead his own groups (Lookout Farm; Quest;The Dave Liebman Group) featuring musicians such as John Scofield, Richie Beirach, Billy Hart, Adam Nussbaum, Al Foster, John Abercrombie and Vic Juris. Lieb has consistently placed among the top three in the Downbeat Critics Poll for Soprano Saxophone since 1973 and is considered by critics along as one of the main exponents of this very specialized instrument.
David has been featured on nearly three hundred and fifty recordings, of which he has been the leader or co-leader on one hundred fifty with several hundred original compositions published. His repertoire is among the most eclectic of contemporary artists ranging from original adaptations of standard material (West Side Story, Monk, Coltrane, Miles, Cole Porter, Alec Wilder, Puccini, Jobim, Kurt Weill) to 20th century inspired classical music; from fusion to his own big band and free jazz ensembles.

Notable performances featuring Liebman as soloist in a contemporary classical setting include the groups “Klangforum”(Vienna, Austria) and the Ensemble Intercontemporain (Paris, France). In the education field he is a renowned lecturer producing several instructional DVDs and books, most notably: "Self Portrait of A Jazz Artist"-"A Chromatic Approach to Jazz Melody and Harmony"-"Developing A Personal Saxophone Sound,” which have been translated into other languages. In addition Liebman has published chamber music pieces (Advance Music, Germany) for a variety of instrumentations.

He is the founder (1989) and Artistic Director of the International Association of Schools of Jazz (IASJ), an organization of jazz schools from over forty countries representing every continent that promotes cross cultural student/teacher exchanges. Awards granted to Liebman include:
-National Endowment of the Arts (NEA) Masters of Jazz (U.S. 2011)
-Order of Arts and Letters  (France 2009)
-Jazz Journalists Award  for Soprano Saxophone (U.S. 2007)
-Grammy nominations for Best Big Band Arrangement performed on Lieb Big Band recording "Beyond The Line"(2004); Best Jazz Solo (1998)
-Induction into the International Association of Jazz Educators Hall of Fame (2000)
-Honorary Doctorate from the Sibelius Academy (Helsinki, Finland-1997)
-Two National Endowment of the Arts (USA) grants for performance and composition

He currently serves on the Board of Advisers for Jazz Improv Magazine, the Chet Baker Foundation,the Pensylvania Regional Jazz Coalition, American Jazz Venue and is presently Artist in Residence at the Manhattan School of Music in New York City.