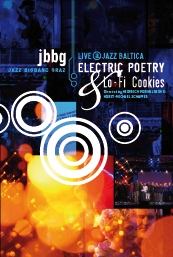 Catalog number: INTCHR 71300
Releasedate: 30-04-10
The concert was the celebrated highlight at the Jazz Baltica Festival in Germany 2009 - a true festival for the eyes and ears of all those present.
- Jazz Bigband Graz, the right standards for new departures and adventure
- more than 90 minutes of a celebrated highpoint of the German Festival 'Jazz Baltica'
- features 5.1. Dolby Surround, PCM-Stereo, plus a slideshow of snapshots from the live tour

In 2009 when the Jazz Bigband Graz (JBBG) made their guest appearance with their program Electric Poetry & Lo-Fi Cookies at the 19th Jazz Baltica Festival, it became the celebrated highpoint of this major musical event in the German town of Salzau near Kiel. In addition to the two renowned bandleaders, Heinrich von Kalnein and Horst-Michael Schaffer, the ensemble included other top soloists from the European jazz scene, such as Johannes Enders, Henning Sieverts, Gregor Hilbe, Oliver Kent, Christoph 'Pepe' Auer, Robert Friedl and David Jarh. This evening was a true festival for the eyes of all those present, thanks also to the brilliant supporting visual effects provided by the Austrian video artists of OchoResotto.
Special features of the DVD include 5.1 Dolby Surround, as well as PCM-Stereo, plus a slideshow of private snapshots from the live tour.

The Jazz Bigband Graz includes top soloists of the European jazz scene, and is one of the most renowned and respected large ensembles in Europe