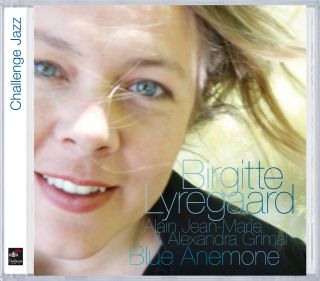 Catalog number: CHR 70161
Releasedate: 01-10-10
Birgitte Lyregaard captivates the listener with her pureness and her love for the most beautiful melodies in the world: the jazz ballads. This love shines through in every note she sings together with saxophoneplayer Alexandra Grimal, who won several prizes and plays for instance with Gary Peacock, Paul Motion and Lee Konitz and the legendary pianist Alain Jean-Marie (who played with giants like Chet Baker, ee Dee Bridgewater,, Charlie Haden and many more).
Blue Anemone, the titlesong of the cd ”and in Danish "Den blå anemone”, is a Danish song about maintaining hope through times of darkness. Planting a seed in unfamiliar ground and thinking that the roughness and incompatibility of the surrounding elements will be the end of this fragile existance. But come spring, surprise and joy, a spot of sky blue breaks through the soil. Even stronger from resistance this beautiful flower reminds us that there is always a way up and out, no matter how impossible things may seem and that flowers can survive to spread hope and joy in even the most unlikely places.

Though today she is also active with musical projects of different genres (impro, deep pop, poetry rock) her intial love - the jazz standard - has never seized to fascinate and occupy her. So with this trio Birgitte Lyregaard (w. Alain Jean-Marie, piano and Alexandra Grimal, saxophones) gets lost in the American Book of Standards, the bare, re-defined essentials of the soul of the jazz ballads.

She was made at sea, born in England and grew up in Denmark. Already in primary school she began imitating the voices of Louis Armstrong, Edith Piaf, Marguerite Viby a.m.o. Forms at the age of 20 her first jazz trio and leaves for Holland and 6 years of conservatory studies at the age of 24. Master of jazz vocal and improvisation obtained in 2004.

Though today she is also active with musical projects of different genres (impro, deep pop, poetry rock ) her intial love - the jazz standard - has never seized to fascinate and occupy her. She has performed in various jazz festivals and venues all through the years( a.o. in Copenhagen, Reykjavik, Holland, South Africa and France ) w. jazz musicians like Thomas Fryland, Harmen Fraanje, Jacob Fischer, Kristjana Stefansdottir, Hein van der Geyn, Yves Rousseau, Mikkel Jakobsen, Harumi Oka and many, many others. Today she lives and works in France, just outside Paris. Where she is active with following projects:

Les plus belles Ballades, jazz-trio w. Alain Jean-Marie, piano and Alexandra Grimal, saxophones. A getting lost in the American Book of Standards, the bare, re-defined essentials of the soul of the jazz ballads. Performances in Paris, Café Universel, Swan Bar and Sunset. The trio has recorded the current CD 'Blue Anemone' in 2010 for ”Challenge Jazz”.

Tale of the Forbidden Flower, a Concert Tale fusioning improvised music, storytelling and songs. She is the storyteller, vocalist as well as the author of story and lyrics and co-composer with pianist of the performance, Rune Kaagaard. Also playing : Manja Ristic, violin (Serbia), Toma Gouband and Mathieu Calleja, percussion (France). Performances in Denmark, France, Holland and Croatia. In fall 2009 the performance was in residence at La Maison du Conte (The House of Tales) in France, working on a French adaption of the story with storyteller Pépito Matéo w. the support of the Oticon Foundation and La Maison du Conte. This summer the performance plays in Toulouse and on the festival « Les Mots à la bouche » .

SecretPet, deep pop trio, own songs and lyrics from the world of dreams, animals and moon travel. A cd has been recorded and will be released through ”Gateway”, a Danish record company for independant artists.
Concerts in Denmark and in Pragh. W. Rune Kaagaard, piano and co-composition; Mathieu Calleja, percussion and electronics.

Haïku, impro trio evolving around haïku poetry in English and japanese w. Double bass player, Frédéric Marty and electronics and treatment Ai Watanabe. Performances in Paris and a cd is out on ”Au petit Disquaire”. Birgitte has also participated as a vocal improvisor and composer in dance performances and on B-link festivals for streaming music live streaming radio transmissions between Belgrade and Denmark or Belgrade and France.
In Februrary/March 2010 she took part as actor and vocalist in the creation and performance of the Serbian Multimedia production « Theatre of Memories » w. premiere in Belgrade in co-operiation w. Auropolis, Serbian association of multimedia artists and the support of the European Cultural Foundation. In the music she plays with every possible parametre of the voice and arouses associations – all due to genre and context – to Billie Holiday, Nina Hagen, Björk, Danish Cabaret 1943, Chet Baker and a bread machine.

About her performance in jazz, people have said that she: ”Spellbinds her audience”, ”Her voice is soothing, pleasant, nordic, pure, laid back and a little juvenile”,”Her expression and sound puts the listener in a state of inner peace”, ”She sings in a way that makes the audience understand the story and lyrics of the songs she performs”, ”She never sings a song in the same way twice”.

She works with instant composing, tells tales in her singing and cultivates a passionate relationship with spontaneous, poetic sonorities within the musical momentum.

Paris saxophonist and composer, Alexandra Grimal, is a quickly rising star on the jazz scene of Europe and New York. She has studied at the Sibelius academy in Helsinki, at the Conservatoire supérieure in Paris and w. John Ruocco at the Royal Conservatory of the Hague, has won several prizes for her playing and lives now in New York where she recently recorded her third album of own compositions w. Gary Peacock, Paul Motian and Lee Konitz.