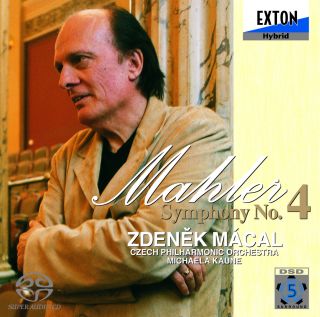 Catalog number: OVCL 267
Releasedate: 31-12-06
Zdeněk Mácal, a leading conductor of the new millennium, and the prestigious Czech Philharmonic release their new CD of Mahler's symphony series. They received the Record Academy Award for Mahler's third symphony. For the eagerly awaited 4th album, they recorded Symphony no.4, which is comparatively a small work for Mahler's symphony but full of pastoral and heavenly sounds. Mácal's warm and calm baton naturally brings out Mahler's beautiful music from Czech Philharmonic in great condition.
"I have now come full circle, I left from here and here I have returned," was how Zdenek Macal referred to his appointment as principal conductor to the Czech Philharmonic at the beginning of the 2003-2004 season. Theworld-renowned and charismatic musician, famed for his masterful interpretations and gracious conducting style, returned to Prague and the Czech Republic after many years spent abroad, in order to take up a prestigious artistic position in the country of his birth and from which he embarked on his brilliant international career. Zdenek Macal (born 1936) - currently permanently residing in Switzerland - studied at the Musical Academy and the Janácek Academy of Music and Dramatic Arts in his native Brno.
The first time he found himself in the spotlight was when he won two important musical competitions: the international conducting competition in Besanc¸ on in 1965 and the Dmitri Mitropoulos Competition in New York in 1966, when Leonard Bernstein was chairman of the panel of judges. At the beginning of his career he worked closely with Czech orchestras, including the Czech Philharmonic, with whom he toured to Rumania, Bulgaria and Turkey (1966) and Germany and Switzerland (1968). After the Soviet occupation of the then Czechoslovakia, Zdenek Macal emigrated and immediately became intensively involved in international musical life. He became, in turn, musical director of theCologne Radio Symphony Orchestra and the Hannover Radio Orchestra, Chief Conductor of the Sydney Symphony Orchestra, Musical Director of the Milwaukee Symphony Orchestra and Chief Conductor of Chicago's Grant Park Summer Festival. In subsequent years he was responsible for the phenomenal rise of the New Jersey Symphony Orchestra which he led from 1993 to 2002. In May 1998 he was honoured with an honorary doctorate from Westminster Choir College.
During his career he has been regularly invited to perform with other leading American orchestras: whether he appeared as guest conductor of the New York Philharmonic, the Chicago Symphony Orchestra, the Philadelphia Orchestra, the Washington National Symphony, Pittsburgh Symphony, Los Angeles Philharmonic or the Boston Symphony Orchestra, he has always presented himself as an incredibly
dynamic conductor with a clear musical conception and exceptional emotional depth. He has performed in Europe with similar application, conducting some of the most famous orchestras, such as the Berlin Philharmonic, all the London-based orchestras, Orchestre de Paris, Orchestre National de France, the Wiener Symphoniker and the Bavarian Radio Symphony Orchestra. Guest appearances also took Zdeneˇ k Mácal to Japan, the La Scala Orchestra in Milan and other principal opera houses. All together, his career as a conductor has entailed working with over 160 orchestras on four continents. Mácal's musical profile would not be complete without a mention of his participation in top international festivals (Vienna, Lucerne, Montreux, Edinburgh, Prague, Athens, Besanc¸ on and, in the USA, Ravinia, Tanglewood, Wolf Trap and the Hollywood Bowl) and his innumerable recordings which, during his career as conductor, he made primarily for Delos and Koss, but also for Sony, EMI, Decca, Deutsche Grammophon and Supraphon. Especially these days, he has been actively involved in the series of recording projects with Czech Philharmonic for the label EXTON / Octavia Records Inc. and Mahler Symphony No.3 among them released in 2005 won the prestigeous record awards in Japan, "Record Academy Awards".
His return to his country of origin to work with Czech orchestras held a hint of sensation: he first returned to conduct the Czech Philharmonic once again during the 1996 and 1997 Prague Spring International Music Festivals and subsequently renewed his collaboration with the Prague Symphony Orchestra where, in 2001, he accepted the post of Chief Conductor. His fateful love of the Czech Philharmonic -as he himself describes his relationship with the orchestra -has, however, finally been fulfilled: Zdeneˇ k Mácal's arrival at the Rudolfinum in Prague, the home of the Czech Philharmonic, as Chief Conductor for the 2003-2004 season, heralds a new chapter in the history of the Czech Philharmonic and his own musical career. This will last until at least 2008.

Czech Philharmonic Orchestra Czech Philharmonic Orchestra
The Czech Philharmonic Orchestra (CPO) gave its very first concert on 4 January 1896 in the Rudolfinum, conducted by no less than Antonín Dvorˇ ák. In 1901 Ludvík Cˇ elansky´ became chief conductor of the now-independent orchestra, and from 1903 to 1918 it was led by Dr. Vilém Zemánek who despite considerable financial difficulties managed to maintain the orchestra and stabilize its position on the Prague musical scene.
In 1919, the first year after the war, the post of chief conductor was taken by the legendary Václav Talich who led the orchestra until 1941, apart from an interruption between 1931 and 1933. After the short but artistically-fruitful term of Rafael Kubelík at the head of the CPO from 1942 to 1948 the role of chief conductor was taken over for eighteen years by Karel Ancˇ erl, from 1950 to 1968.The years of Ancˇ erl's leadership are considered the orchestra's greatest period of artistic development. After his emigration to Canada the chief-conductor's position was assumed by Václav Neumann, who presided over a long period of stable high quality and successful maintenance of tradition until 1990. After the change in the political situation in the country, in the 1990s several distinguished musicians took turns as chief conductor in relatively rapid succession:
Jirí Belohlávek (1990-92), Gerd Albrecht (1993-96), and Vladimir Ashkenazy (1996-2003).
The Philharmonic entered its new 2003-04 season with a new chief conductor, Zdeneˇ k Mácal (born 1936), who at the height of his experience in art and in life is coming to head the orchestra with which he launched his spectacular conducting career from 1966 to 1968. Since the beginning of the CPO's existence its reputation has been furthered by internationally-esteemed guest conductors including Edvard Grieg, Eugene Ysaÿe, Sergey Rachmaninoff, Artur Nikisch, and Gustav Mahler - the last of whom led the world premiere of his Seventh Symphony with the Philharmonic in Prague in 1908 - and especially by excellent conductors who worked with the orchestra repeatedly such as Erich Kleiber, Bruno Walter, Alexander Zemlinsky, Georg Sze´ ll, Charles Munch, Yevgeny Mravinski, Leonard Bernstein, Leopold Stokowski, Franz Konwitschny, Sergiu Celibidache, Gennady Rozhdestvensky, Kirill Kondrashin, Lorin Maazel, Zubin Mehta, Bernard Haitink, Claudio Abbado, and Riccardo Mutti among others.
Another great contribution to the CPO's international renown have been its performances abroad. The orchestra performs to this day, above all in the prestigious BBC Proms and in the Edinburgh Festival. In 1959 the Philharmonic's first overseas concert tour took it to Australia, Japan, New Zealand, China, India, and the Soviet Union.The CPO's first tour of the United States and Canada was in 1965, on which occasion the triumphal successes of Karel Ancerl assured the orchestra an excellent reputation in the USA which it has maintained to this day in performing Czech music. The Czech Philharmonic regularly spends over two months of the year traversing the globe to applause in the Carnegie Hall, and enthusiastic audiences in Florida, to the London Proms, Spanish cities, the Baltic states and Japan. In Japan it has become so much 'at home' that its annual performances in prestigious halls including Suntory Hall, Tokyo have become a regular and expected part of concert seasons there.