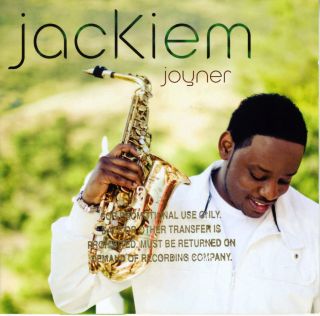 Catalog number: ART 7022
Releasedate: 03-09-10
Jackiem Joyner is ready for his Hollywood close-up. It’s already been a big year for the multidimensional sax player both professionally and personally. Dramatic events offstage have inspired his work in the spotlight while his passion for movies has influenced the songs, sounds and textures used in the creation of his third album, a self-titled disc that arrives as Joyner is poised to become a top-of-the-marquee smooth jazz star.

Like a silent film, Jackiem Joyner tells a story without words, with an instrumental voice that for the first time in the artist’s recording career includes a tenor sax in addition to his trademark alto and soprano horns. He also plays most of the other instruments on the album. As on his previous releases—Lil’ Man Soul and babysoul—Joyner wrote, produced, recorded and mixed the record aside from a few select cover tunes.

Sonically and compositionally, the collection reflects artistic progress and evolution while remaining true to Joyner’s core sound. Thematically, the moods and tones are varied, yet at their essence they are deeply rooted in the rich soil of soulful expression and raw emotion. Rhythmically, Joyner audaciously explores complex, astute and frenetic beats. Joyner explains, “Ever since I was 12 in my mom’s house, I’ve been drumming on walls, tapping out rhythms with spoons and beating on anything that I can. I still have that habit today. I always hear beats in my head; it’s intriguing to see where they take me.

“The whole record is about writing and making the type of record that I wanted to make. It’s me putting whatever I want on the album. I’m happy working with Mack Avenue because they gave me complete freedom to create. You can really hear me right upfront and my music. My first two albums were titled after my nicknames, but now it’s just me front and center for the entire world to see, which is why I decided to go with a self-titled album.”

The two things that shaped Jackiem Joyner most of all were an unexpected family reunion and the artist’s desire to write film scores. An energetic man who left his twenties behind earlier this year, Joyner recently reunited with his father and two older sisters whom he had not seen or talked to since he was seven years old. “One night my wife handed me the phone and told me to say hello. A voice on the other end asked if I knew who I was talking to. I had no idea. On the line were my father and sisters. I was blown away. It was a really emotional moment. My wife found them through some kind of a computer program. Subsequently, we reconnected in person. Very emotional,” reveals Joyner. As for the cinematic influence Joyner shares, “I’d like to get into film scoring and I’ve already started writing material. I listen to a lot of [film scores], which influenced the sounds and samples on the new record.”

Jackiem Joyner arrives hot on the heels of Joyner’s 2008 sophomore release, Lil’ Man Soul, which spawned two #1 singles. Topping the smooth jazz radio charts for an incredible 12 weeks, “I’m Waiting For You” was the longest-running #1 single in 2009 and is up for Song of the Year at the inaugural American Smooth Jazz Awards. In 2010 the album’s “Take Me There” climbed to the summit position and setup camp. Babysoul, Joyner’s first album, debuted at #15 on the Billboard chart in 2007 led by the single “Stay With Me Tonight,” a duet with iconic smooth jazz guitarist Peter White. While both albums were warmly received at smooth jazz—Smooth Jazz News named Joyner the Debut Artist of the Year—they were essentially urban jazz collections.

Around the time Joyner launched his solo career, he became a featured musician in keyboardist Keiko Matsui’s touring band and continues to tour internationally with her, for whom he plays sax and flute. One memorable experience with Matsui was performing with live orchestras in Ukraine and Washington DC. In DC they played with the Air Force Band—the same band Joyner performed with once during high school. “It was pretty cool to go back now as a professional [musician] to play with the Air Force Band in Constitution Hall,” Joyner recalls fondly. “It’s challenging playing with orchestras. It really keeps you on your toes. There are so many moving parts to listen to and keep track of.”