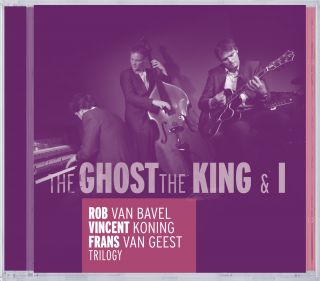 Catalog number: DBCHR 74051
Releasedate: 07-03-11
Rob van Bavel took the three best known Preludes of Gerschwin as a basis for his arrangements and combined these with fragments from the standards such as “Summertime,” “The Man I Love” and “Embraceable You.”. Also for instance, several Debussy-pieces from Children’s Corner, an Arabesque, and fragments from the Estampes/Preludes, serve as the basis for two arrangements. “Trilogy” (the self-portrait The Ghost, The King And I) is a triptych with a recurring main theme—a leitmotif if you will, written by Rob van Bavel.
Thelonious Monk was an American and American jazz players ranked among the best and best-known of their era. But several generations later, European musicians have also made a serious mark in
the field of jazz. Some of them, including several Dutch players, are every bit as good as their American counterparts. Monk was a unique individual with such a personal approach to music, for many years it seemed impossible to be influenced by his playing without imitating him outright. As you will hear, the trio on this record make no attempt to imitate.
The three Dutch musicians on this CD show that they have a thorough command of the jazz idiom, and mastery of the skills required. Nowadays, a lot of music gets labeled as jazz, but the music made by this drumless trio is clearly based on the jazz mainstream, whether they’re playing Debussy, Gershwin or familiar standards.

The trio has a natural sense of swing, and this program gives GK&I plenty of room to show off their virtuosity and improvisational skills. George Gershwin wrote countless songs that have been performed by jazz musicians and are still part of the standard repertoire, including “Summertime,” “The Man I Love” and “Embraceable You.” His works also include serious classical pieces such as Piano Concerto in F and the piano Preludes. Gershwin wanted to write 24 preludes, like Chopin and Bach (in The Well-Tempered Klavier), twelve in minor and twelve in major keys. However, he only managed to compose about nine. Rob van Bavel took the three best known Preludes as a basis for his arrangements and combined these with fragments from the standards mentioned above. Claude Debussy was an important exponent of impressionism (though it appears that he detested being categorized so). He was a huge inspiration to jazz pianist Bill Evans. Several pieces from Children’s Corner, an Arabesque, and fragments from the Estampes/Preludes, serve as the basis for two arrangements. Another track is based on Arabesque no.1. “Trilogy” (the self-portrait The Ghost, The King And I) is a triptych with a recurring main theme—a leitmotif if you will. It was written by Rob van Bavel, who also composed “G String.” The only standard on this album is Victor Young’s famous “My Foolish Heart,” with an intro based on Debussy’s Pagodes.


The Ghost, the King and I is a drumless trio founded in 2007 by pianist Rob van Bavel. (He’s the “I.”) The other members are Frans van Geest (geest is Dutch for ghost) on bass and Vincent Koning (The King) on guitar. GK&I take their format and primary inspiration from famous trios such as Nat Cole’s, Art Tatum’s and Oscar Peterson’s. Those earlier trios bookend the 60 years of jazz this trio builds on. GK&I has played on various stages in the Netherlands, and also at the Tokyo Jazz Festival in 2009 and in Siberia in February 2010. Their first CD, no. 11 in Daybreak’s “en blanc et noir” series, came out under Rob van Bavel’s name in 2009.
Their concert repertoire consists of original material and new arrangements of standards, mostly written by Rob van Bavel. The selection here includes an adaptation of three of George Gershwin’s Preludes for piano,
and pieces by Claude Debussy.

Rob van Bavel (16-1-1965)
Graduated in 1987 at the Rotterdam Conservatory with the highest possible mark (A with distinction). He won several awards, a.o. the second prize at the first "Thelonious Monk Jazzpiano Competition" (Washington D.C.), soloist awards in Germany/Belgium, the Wessel Ilcken Award (Holland) and the Dutch Grammy (Edison) for the cd "Rob van Bavel trio".
He made many cd's as a sideman and as leader: Rob van Bavel Octet and Rob van Bavel Trio. Some cd's released by RVB Productions, a.o. "Duo Rob van Bavel/Marc van Rooij LIVE".
Nowadays working as a teacher at the Rotterdam Conservatory (Codarts) and the Amsterdam Conservatory (Conservatorium van Amsterdam). Of course also performing (inter-)nationally with several groups, such as The Ghost, The King And I. Van Bavel played with Woody Shaw, Randy Brecker, Slide Hampton, Johnny Griffin, Bob Mintzer, Wynton Marsalis, Gary Willis a.o.