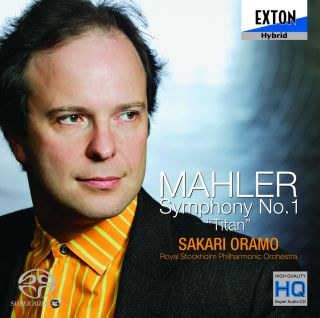 Catalog number: EXCL 34
Releasedate: 01-10-10
The new recording of Sakari Oramo and Royal Stockholm Philharmonic Orchestra produced by EXTON, Japanese classical music label internationally known especially for its audio quality. Mr. Oramo, the conductor of great talent devoting entire his energy to the music, is now the chief conductor and artistic advisor of this orchestra, and this recording of Mahler 1st symphony reveals how wonderfully the chemistry between this combination works!

“Mahler was in control of losing control; the control of chaos and extremities” says Oramo about Mahler.

Early in his conducting career, Oramo remembers that he was comfortable with Mahler's First Symphony and the songs but he was not completely at ease with all of Mahler at that time. When he lived in Birmingham he came accquainted with the Fourth and Fifth Symphony and others later on. It  was like a foreign language to him and Finnish people, is was like of another world. That made the process go somewhat slower, but nowadays he has adapted the vocabulary fully.

Mahler once said (to Sibelius) that "a symphony has to contain the whole world, not just one slice of it", and this aspect Oramo finds very important: to work not on one level but on all the levels (of emotionas, textures etc.)

Mahler wanted to touch and wake up people and lay out his deepest inside, his soul to the whole world. He was something of an exhibisionist and of a priest but not a religious one. A priest of a modern lifestyle"- Oramo

Sakari Oramo's unquestionable skill as a conductor and his palpable commitment to the highest quality music-making have earned him the greatest respect and widespread admiration. He appears regularly with the word’s most prestigious orchestras such as the Berliner Philharmoniker, Royal Concertgebouw Orchestra, NDR Sinfonieorchester and the New York and Oslo Philharmonic orchestras. Upcoming highlights include engagements with the Boston Symphony Orchestra, Staatskapelle Dresden and Orchestre de Paris, and a European tour with the Chamber Orchestra of Europe. Sakari Oramo has a number of highly-acclaimed recordings to his credit on Ondine, Warner Classics and Hyperion labels and is a recipient of numerous awards, including an Honorary OBE from HM the Queen in recognition of his services to music.