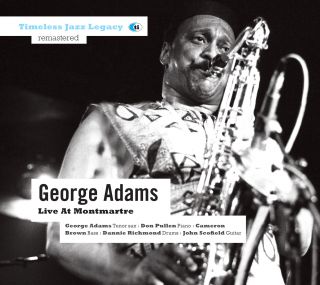 Catalog number: TJL 74501
Releasedate: 01-10-10
The memorable I.J. is quite an opener, but the George Adams-Don Pullen group never lets up, creating historic music full of fire. Even with John Scofield added as a special guest, this band would never be mistaken for anyone else.
Recorded live at Jazzhus Montmartre, April 4 and 5, 1985

A Dutch promoter had booked Mingus with Pullen, drummer, Dannie Richmond and Adams on an extensive tour of Holland. After Mingus' death in 1979, he (the promoter) wanted to call the remainder of the group 'The Mingus Dynasty'. We didn't mind doing the tour, but we didn't want to be called by that name without Charles Mingus. Cameron Brown became the groupÌs bassist as the tour began in November 1979. The George Adams-Don Pullen Quartet toured Europe for the first few years. Then a date at New York's Village Vanguard catapulted them to fame in the U.S. But it wasnÌt this group that brought Adams to the Apple. I went on the road with organists, Hank Marr at first, later Bill Dogett (Honky Tonk). When I came to N.Y. (with Dogett) I had $100 in my pocket. The very next day I got a gig with the Flamingos (a charted R&B group) in Brooklyn. Six months later George Adams was back with organists, this time Lonnie Smith was the leader. Drummer, Roy Haynes, for whom Adams has great respect, led a group which featured George. But it was with Mingus where he became widely recognized. The world was rediscovering Charles Mingus during the early 70s and the great bassist/composer was experimenting with new voicing. He used drummer Roy Brooks playing saw with mallet; Charles Magee played two trumpets÷ at the same time. And George Adams was creating a new voice of his own based on Mingus ideas.

George Adams (1940-1992) never took it easy. His tenor playing not only displayed a mastery of standards and chords but a wide range of sounds including screams and roars. Adams started his career in high school playing tenor in funk bands. His first important musical job was in 1961 when he toured with Sam Cooke.
Adams spent 1963-67 mostly playing with organ groups in Ohio. In 1968 he moved to New York and quickly became noticed. He worked with Roy Haynes, Gil Evans and Art Blakey's Jazz Messengers. Adams gained fame as a member of the Charles Mingus band during 1973-76 where his passionate playing perfectly fit the bassist's music. After a stint with McCoy Tyner, Adams co-led a quartet with pianist Don Pullen, who was also a former member of Mingus' group. The band lasted for nine years (1979-88).
In his later years, George Adams sometimes worked with guitarist Blood Ulmer in the group Phalanx, was a member of Mingus Dynasty, and led his own bands, never coasting or playing the predictable.