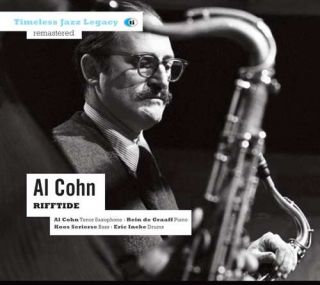 
Al Cohn (1925-1988) was greatly admired by his fellow musicians throughout his life, and for good reason. A true professional, Cohn was very consistent and creative in both his playing and his arranging-composing. He began his career playing with such bands as those led by Joe Marsala (in 1943), Georgie Auld, Boyd Raeburn, Alvino Rey, and Buddy Rich. He was with Woody Herman's Second Herd during 1948-49, impressing many with his boppish arrangements, and also with Artie Shaw's bop orchestra of 1949.
The 1950s were a very busy time for Cohn, both as a freelance player and as an arranger. In addition, in 1956 he formed the first of many quintets with fellow tenor Zoot Sims. While Cohn did not play that much for a period in the 1960s and '70s when he was mostly working as a writer, by the mid-1970s he was active again. His tone became darker and more distinctive during the five years before his death in 1988.