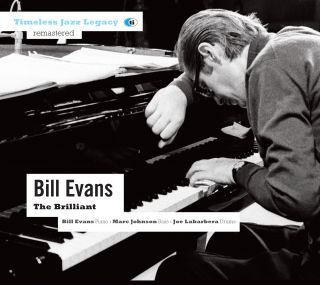 Catalog number: TJL 74507
Releasedate: 01-10-10
Bill Evans' productive and very influential career reached its highest level with his final trio. The Brilliant Bill Evans is one of the best programs by this group and a must for the pianist's many fans.
Featuring:
BILL EVANS - piano
MARC JOHNSON - bass
JOE LABARBERA - drums


Bill Evans (1929-80) has been one of the most influential jazz pianists of the past 50 years. His chord voicings, interplay with his sidemen, and repertoire have been emulated by hundreds of other pianists.
Evans went to college on a flute scholarship but graduated as a piano major in 1950. After serving in the military, in 1954 he began four years of freelancing in New York which included playing with Mundell Lowe and Tony Scott, and making his first recordings as a leader. In 1958 he spent eight months as a member of the Miles Davis Sextet, playing alongside John Coltrane and Cannonball Adderley. He returned to Davis the following year to record most of the album Kind Of Blue.
During 1959-61, the Bill Evans Trio featured bassist Scott LaFaro and drummer Paul Motian. LaFaro's death in a car accident resulted in the pianist dropping out of music for a year before returning with a new trio.
Although occasionally heard in different formats, Bill Evans mostly led a series of trios during the remainder of his life, including several that featured bassist Eddie Gomez. His final trio with Marc Johnson and Joe Labarbera stayed very busy during the two years prior to Bill Evans' death at age 51.