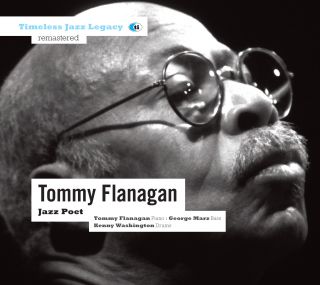 Catalog number: TJL 74508
Releasedate: 01-10-10
Whether swinging at a medium-tempo pace, caressing the melody of a ballad, or digging into the St. Louis Blues, Tommy Flanagan and his two notable sidemen are heard at their most creative throughout this memorable effort from 1989.
Tommy Flanagan - Piano
George Marz - Bass
Kenny Washington - Drums


Tommy Flanagan (1930-2001) was one of the great pianists who emerged from Detroit in the 1950s along with Barry Harris and Sir Roland Hanna, all of whom followed Hank Jones from the 1940s. Flanagan started on clarinet, switching to piano when he was 11. During 1946-56, with the exception of two years spent in the Army, he was a major part of the Detroit jazz scene. After moving to New York, Flanagan appeared on many records during the next decade, working with Oscar Pettiford, J.J. Johnson, Harry “Sweets” Edison and Coleman Hawkins. He was Ella Fitzgerald's regular pianist during 1963-65 and 1968-78 and for a time was strongly underrated as a soloist. That changed when Flanagan, who had led some early sessions, began to record again as a leader in 1975. After leaving Ella, he was greatly in demand with his trio during his final 23 years. He was always the epitome of good taste and brought to audiences the very best in bop piano.