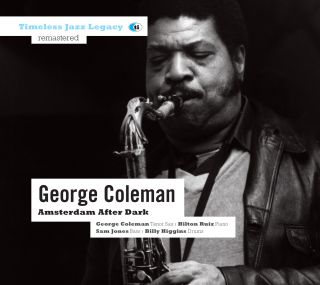 Catalog number: TJL 74509
Releasedate: 01-10-10
George Coleman has been an exciting tenor-saxophone soloist for over 50 years. Amsterdam After Dark, which matches him with a brilliant rhythm section, is one of the highpoints of his long career.
Recorded, 29 December 1978 in the Sound Ideas Studio, New York.

George Coleman (born in Memphis in 1935) gained early experience playing his tenor in blues bands in Memphis and throughout the south, including with B.B. King in the mid-1950s. After playing with the MJT 3 in Chicago in 1957, he moved to New York. Coleman worked with the Max Roach Quintet, Slide Hampton's octet, and organist Wild Bill Davis. While with the Miles Davis Quintet in 1963-64, Coleman played alongside Davis, Herbie Hancock, Ron Carter and Tony Williams. He also recorded Maiden Voyage with Hancock.
Coleman became a bandleader after leaving Davis but also worked with Lionel Hampton, Charles McPherson and on and off with Elvin Jones' Jazz Machine. He has continued to grow as a soloist through the years and is still active today at the age of 75.