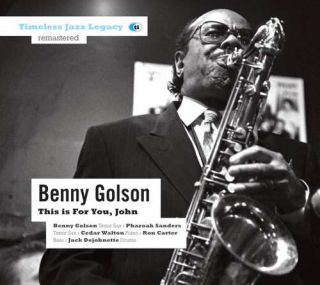 This is For You, John

Catalog number: TJL 74510
Releasedate: 01-10-10
Benny Golson's meeting with Pharoah Sanders and the all-star rhythm section brings out the best in all of the musicians. John Coltrane's spirit can certainly be felt throughout the stirring performances.
Recorded December 20-21,1983 at Vanguard Studio, New York City


Benny Golson (b. 1929, Philadelphia) has been a major tenor-saxophonist and composer for over a half-century. He began his career playing with the r&b band of Bull Moose Jackson in 1951 and with other local groups in Philadelphia. Golson worked with Tadd Dameron in 1953, the Lionel Hampton Big Band, Johnny Hodges and Earl Bostic. His Stablemates was recorded by Miles Davis in 1955.
Golson, whose tenor playing during the era was influenced by Don Byas and Lucky Thompson, gained his first fame as a member of the Dizzy Gillespie big band of 1956-58. He helped to make Art Blakey's Jazz Messengers into an important jazz institution through his professionalism and compositions during 1958-59, and during 1960-62 he co-led the Jazztet with Art Farmer. During that era he wrote such standards as Killer Joe, I Remember Clifford, Whisper Not, Blues March and Along Came Betty.
After his long period in the studios, Golson emerged in 1977 with a freer style and a different tone, resuming his role as a prolific musician. He has led his own quartet ever since and is still active today at 81.