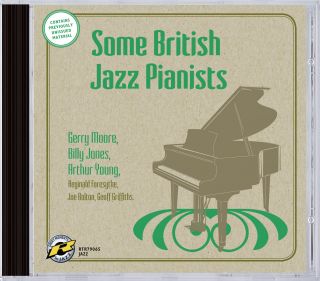 Catalog number: RTR 79065
Releasedate: 01-04-11
" But, I trust, this CD will show that there was some genuine talent on the British piano scene in those earlier days (before Second World War ), which, when it was given the chance, could shine as brightly as many more famous names of the period." (Max Easterman)
The title of this CD says exactly what it is: some British Jazz pianists: extraordinary pianists of the early years (before Second World War). Also with previously unissued material.
Max Darewski was the younger brother of Herman Darewski, the song-writer and music publisher. He was born in Manchester in 1894; by the age of ten, he was described as a ‘child musical prodigy, composer, and conductor’, and was appearing at south coast resorts with music-hall stars of the calibre of Marie Dainton. Perhaps the fact that his elder brother was married to singer Madge Temple helped, but he was clearly successful on his own terms: in 1902, he composed England's Crown to mark the Coronation of Edward VII;  a couple of years later, he created a minor sensation by conducting a full orchestra playing his own compositions at Bournemouth. And in 1905 he conducted the massed bands of the Brass Band Festival at the Crystal Palace in south London. At around this period, he also toured Europe as a pianist…on the evidence of his few recordings, a very good one, though he was no jazz or even pure ragtime player. Monkey Blues, which he wrote in 1918 and recorded five years later, is neither a blues nor a rag, but it shows flashes of real jazz feeling, which mark it out from the majority of piano novelties of the time. Max Darewski died, aged 35, in 1929.

Joe Bolton was the pseudonym under which Joe Batten recorded ragtime and other ‘light’ pieces when he was with Edison Bell Records between 1920 and 1927. Born in 1885 in Hoxton, east London, he was entirely self-taught and earned his early crusts teaching other aspiring pianists. But he built a long career for himself in the recording studios, which, before the First World War, were concentrated in the City Road area of London. Joe Batten claimed to have worked as a pianist for 39 of the seventy or so companies that existed before 1914, including now long-forgotten names, such as Neophone and Musiphone. He joined Edison Bell as recording manager, but worked also as a conductor, composer and anonymous accompanist to vocalists and other instrumental players. After leaving Edison Bell, he joined the Columbia division of EMI and then its Special Recordings unit. Piano Man Rag is much more of a real ragtime tune than Max Darewski’s Monkey Blues, but it’s a great pity the Edison Bell studio had such a poor acoustic, which makes it difficult to hear some of its more interesting musical flourishes. As far as is known, Joe Batten’s only other ragtime recordings were made – under his real name – for Popular before the First World War. (I am indebted to Joe Batten’s grandson, Michael Lloyd-Davies, for the information on his early career.)

Billy Jones is quoted as saying he was taught to play jazz by ‘a coloured musician’ who worked as a pianist in London clubs before the First World War. This man’s identity has never been established…and the story may in any case be apocryphal. Be that as it may, in 1920 Jones was leading a small group at Rector’s Club on Tottenham Court Road, which was owned by W.F. Mitchell, Billy Jones at 70 – still from a 1963 Pathé short.  Who also ran the Hammersmith Palais de Danse, where the Original Dixieland Jazz Band were by this time in residence. When the ODJB needed a replacement for J Russell Robinson, who returned to New York to work for WC Handy, Billy Jones was on hand to take up the job. He recorded nine sides with the band before they in their turn went back to the USA. Thereafter, apart from one coupling for Parlophone with his own Dixieland Band, these four previously unissued piano solos for Decca (accompanied by an unknown drummer on all but the last) are his only other known recordings. Just why Decca decided not to issue them is unclear: technically and musically – apart from a slightly muffed start on Maple Leaf Rag – I can hear no obvious faults, so presumably the listening panel thought them too un-commercial for the time. Certainly, Jones gives them all, especially Ringtail Blues a very modernistic interpretation, and maybe this counted against them. In the 1940s and 50s, Billy Jones ran a pub in Chelsea, where he played piano and sang – reputedly the only man who knew the entire lyric of Maple Leaf Rag.

In Gerry Moore we meet Britain’s first full-blooded professional jazz pianist and one of the few who managed to make a living from the music for most of his life; he seems also to have been a man who enjoyed controversy. When times were hard, as they often enough were in the 1930s, Moore was prepared to abandon the drinking clubs, where he could play as he pleased, to take routine, better-paid jobs; he joined Victor Silvester’s strict-tempo dance orchestra. According to Jim Godbolt (A History of Jazz In Britain, 1986, Grafton Books), this decision produced a storm of criticism from his musical colleagues. But the band’s “stultifying monotony” led to his departure after a few months and “a blistering attack on the [strict tempo] format” in the Melody Maker. Silvester angrily replied in kind. But there’s another side to this story: British Dance Bands On Record (Rust & Forbes, 1987, General Gramophone Publications), based on the EMI files, shows Moore as being Silvester’s pianist on all but a couple of sessions from August 1935 to July 1939; and Moore recorded a considerable number of strict-tempo piano solos in that period, supervised by Silvester: tracks 9, 10 and 13 – 15 are so labelled on the original issues. But he clearly had a deal of latitude in what he played and these are excellent jazz solos. It’s unlikely two men would have continued working together if there had been as much bad blood as Godbolt suggests: the most likely explanation is that Moore and Silvester musically needed each other and agreed, however strongly, to differ – outside the recording studios! Perhaps they both also realised that there’s no such thing as bad publicity…Although Gerry Moore claimed one of his major influences was Earl Hines, his style on these first mid-30s records is much more an original blend of Teddy Wilson and Jess Stacy, whose characteristic end-of-phrase ‘shakes’ are particularly in evidence on Brown Sugar Mine – Rhythm Lullaby, whilst Gerry Building, for example, adds some fine Walleresque touches in the up-tempo sections. May Write Blues and Jammin’ are surely two of the finest piano solos recorded by a British musician: the latter, in particular, is musically and technically superb. Moore is accompanied by a drummer on Jammin’, and a string bass is added on the next two titles; if Rust and Forbes are correct that he was still with Victor Silvester at this period, then these are likely to be Ben Edwards (drums) and George Senior, the regular rhythm section from that band; Moore’s sign-off flourish on Crazy Rhythm is exactly as it would have been on a routine Silvester performance, which rather confirms this was the case. Whatever his earlier compromises, Moore was always a modernist and experimenter; he died in 1993, aged 90, having spent his post-war years exploring some of the more obscure reaches of be-bop and beyond.

Reginald Foresythe was, like Gerry Moore, a Londoner by birth, but his musical career was of a different order. The son of a West African lawyer and an English mother, he appears to have had a relatively privileged upbringing with private piano lessons and a boarding school education. In 1927, at the age of 20, he was in Paris as accompanist to Zaidee Jackson; he then toured Australia with another American star, Walter Richardson, before ending 1929 in California, where he recorded with Paul Howard’s Quality Serenaders. Foresythe’s reputation as a musician, however, rests firmly on his work as a composer and arranger, though Jim Godbolt (op.cit.) dismisses him with “he added Reginald Foresythe, 1934 nothing to British jazz.” That may be true in terms of his orchestral output, which largely featured his own, musically advanced works with fanciful titles like Revolt of the Yes-Men, but he nonetheless had great success both in the UK and the USA with compositions like Serenade For A Wealthy Widow. His solo piano work is less well-known, and the two recordings featured here show that, whilst he was always tempted to stray towards the flamboyant – the penultimate chorus of St Louis Blues is pure self-indulgence - he was capable of playing with true jazz feeling and some fine Hines-like touches. Because It’s You is dedicated ‘for Elisabeth Welch’, a great friend of Foresythe’s. His duet with Arthur Young, played on two keyboards, is surely one of the most unusual and original performances of that most popular of jazz standards, Tiger Rag, which not only abandons the usual hackneyed treatment but frequently departs from the basic chord sequence as well!

Arthur Young was reputed to have very large hands - a useful attribute for a pianist, if he wants to play ‘stride’, where the ability to stretch easily to a tenth in the left hand is a great asset – Young is said to have been capable of spanning a twelfth! Whether or not this was true, he was a pianist of considerable ability, but his solo work on record is sparse. He was born in Edinburgh in 1904 and studied medicine, but turned to the piano and won a Gold Medal at the Edinburgh Music Festival. By 1926 he was working for Jack Hylton; then, after recovering from a severe car crash, which doesn’t seem to have affected his playing, he spent some time in Europe, before returning to London, where he recorded with Joe Venuti in 1934. His playing career was again temporarily interrupted, when he was injured in an air-raid in 1940. By this time, he was leading his Swingtette, with Stéphane Grappelli on violin, in the sedate atmosphere of Hatchett’s Restaurant on Piccadilly and had taken to playing the Novachord, a novelty keyboard that was the first commercial polyphonic synthesizer…and not an instrument that was likely to endear him to jazz lovers or fellow jazz musicians! But about a year earlier, in 1938, he recorded a set of acetates of a suite of four compositions by Art Tatum, which he wrote whilst he was on a visit to the UK. These were probably made as reference copies for the publishers – Peter Maurice. Sadly, only three of the four have survived (of Jade there is no trace) and were rescued by Chris Ellis when the Peter Maurice building was being cleared out. Tatum was not noted as a composer, and these are therefore almost unique examples of his work; certainly, as far as I can tell, he never recorded them himself. Arthur Young’s interpretations, especially on Sapphire and Amethyst, are extraordinarily close to what we might have expected from the master at this period, without in any way being stylistically slavish copies. They show just how good Young could be, when there were no commercial considerations at stake; these solos are without any doubt the finest surviving examples of his playing.

By the end of the Second World War, jazz had a turned a harmonic and stylistic corner; a second generation of British pianists was quicker and better prepared to learn the ‘modern’ style of playing. One of them, George Shearing, was among the vanguard of this new wave. His work has been extensively re-issued, though some of his contemporaries - Dill Jones, for example – are almost forgotten figures now. But, I trust, this CD will show that there was some genuine talent on the British piano scene in those earlier days, which, when it was given the chance, could shine as brightly as many more famous names of the period. (Max Easterman)