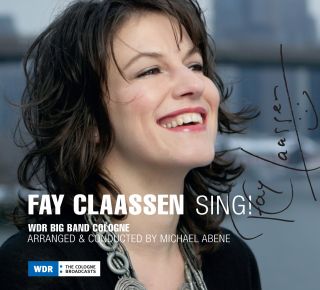 Catalog number: CR 74057
Releasedate: 03-09-10
(The digipack is signed on the inside)
It does say a lot that Fay Claassen is recognized, worldwide, by music critics as a jazz singer of international stature and allure. The greatest jazzdiva of the Netherlands is part of the younger generation vocalists and her new cd one can call 'grand', figuratively ánd literally speaking.

First there is this immense, big orchestra that is accompanying Fay: more than 120 people. In other words this is a BIG Big Band, consisting of WDR Big Band & het Rundfunk Orchester with conducter/arranger Michael Abene. Then there is the repertoire of great female vocal icons: from Ella to Björk and a lot of other famous ladies in between. This all makes the cd a big and extraordinary musical journey around the world. The choice of repertoire makes perfectly clear that Fay Claassen has a very broad musical interest. The fact that she sings also songs of for instance Joni Mitchell and Björk is a very pleasant surprise! Her interpretations are full of conviction and with a high doses of authenticity she makes these songs totally her own.

Cadence in the USA once wrote: “Fay Claassen is to singing what Audrey Hepburn was to the movies: elegant and graceful“. These words are also applicable to this new cd, where women have the leading role. Actrice Audrey Hepburn had a enormous and natural class and that is also a very important characteristic of Fay Claassen.