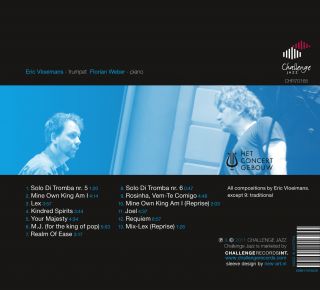 Live at the Concertgebouw

Catalog number: CHR 70165
Releasedate: 20-09-11
Eric Vloeimans started to work with Florian Weber for the first time in Arnhem, then in Cologne and after that in other places. This was very pleasing and inspiring to both and now we have here an album "Live at the Concertgebouw". A very intimate cd that will be interesting for many music lovers!
They played live in the famous Concertgebouw in Amsterdam on April 12 2011 and this album is a registration of that concert. The intimacy, the directness, the beautiful melodies of trumpeter Eric Vloeimans, the unity of this duo when they play together: this is a unique album indeed! Surprising turns and twists are there on this album and the two musicians create show us a lot of different musical landscapes, with no boundaries between jazz and classical music or other genres.

Dutch trumpet player Eric Vloeimans (1963) is regarded as one of Europe's best performers with an extraordinary talent for playing original music with outstanding quality. Vloeimans prefers recording original compositions on his many award winning cd's, however he can often be heard performing a wide variety of tunes. As a composer he does not feel restricted to one particular style, and he has managed to create an evocative, harmonic language of his own. His writing is fresh and creative, yet not without feeling and respect for tradition. Eric Vloeimans is unique among many of Holland's top international jazz artists in that he does not shy away from playing beautifully. He is a rare musician that has mastered the complete range of the trumpet, from the energy laden high notes to the soft, velvety, almost wooden sounds. The talent and the expressive power of Eric Vloeimans' music have been honoured by his winning the Dutch Edison Award four times, the Elly Ameling Prize of the City of Rotterdam, the Boy Edgar Award and the prestigious Bird Award at the North Sea Jazz Festival.

Eric Vloeimans has been active in a wide variety of ensembles all over the years. The two ensembles that he works with now are The Eric Vloeimans Trio 'Fugimundi', with the surprising Anton Goudsmit on guitar and rising star Harmen Fraanje on piano. This trio performs acoustic (jazz) chamber music. Their broad repertoire ranges from contemporary jazz, hymns, world music to occasional standards, all of which is presented with warmth and wit. His other band is Eric Vloeimans' Gatecrash, which features soundscape master Jeroen van Vliet on Fender Rhodes and keyboards, the inventive Gulli Gudmundsson on bass, electric basses and effects, and the up and coming Jasper van Hulten on drums. Vloeimans expands his trumpet mastery with electronics special effects. Gatecrash has earned a reputation as one of Europe's top cross-over bands between jazz and pop. The music ranges from lazy lounge music to hard core uptempo beats and spaced out moods, with Zappa-influenced odd meters. It's a band that sweeps the audience away.

Vloeimans' performances and recordings with a multitude of other formations has shown his versatility. His musical talent, easy-going attitude and great sense of humour have brought him to play with national and international artists such as John Taylor, Marc Johnson, Joey Baron (all three with him on 'Bitches and Fairy Tales'), Mercer Ellington, Peter Erskine, The Rotterdam Philharmonic Orchestra, Jasper van 't Hof, Han Bennink, Furio di Castri, Charlie Mariano, Nguyên Lê, Jimmy Haslip, Jarmo Savolainen, Philippe Catherine, Lars Danielsson, Michael Moore and many, many others.

His musical collaborations have taken Eric Vloeimans abroad many times. With diverse artists and ensembles he played all over Europe, Indonesia, China, the Middle East, South Africa, U.S.A. and Japan. Experiences from his travels influence his music constantly and can be heard in many of his compositions. Eric Vloeimans plays from the heart and has shown a remarkable power to create bridges and reach the hearts of audiences all over the world. In October 2008 and in 2010 he made US tours with his trio 'Fugimundi'- Anton Goudsmit on guitar, Harmen Fraanje on piano, and Eric Vloeimans of course, on trumpet. From this also a extraordinary live-album was made: 'Live at Yoshi's'.

Last year he released, in cooperation with newspaper De Volkskrant, a 5cd-box with his greatest works so far, called V-Flow and also an album of his collaboration with Colin Benders (Kytman) in the cd "Kytecrash" with which they also had a succesful tour around the country.

By the age of 4 Florian Weber began taking private lessons and by the time he graduated from high school he had participated in both classical and jazz ensembles, winning 1st place competition prizes as an ensemble member and as a soloist and had the opportunity to tour as a soloist with the Russian Philharmonic. In 1999 won a stipend to study abroad at Berklee College of Music in Boston. Florian studied with John Taylor, JoAnne Brackeen, Paul Bley, and Richie Beirach. Since 2001, Florian won the Steinway & Sons prize at the Montreaux Jazz Festival Solo Piano Competition and the Gotrian Steinweg prize of Weimar, performed with Albert Mangelsdorff, Eddy Henderson, Lee Konitz and Benny Bailey and completed his studies at Berklee. With his group Minsarah and other projects he toured in America, all over Europe and Japan and played with various philharmonic orchestras performing piano concertos like the “Rapsody in Blue” but also contemporary works. Just recently he signed a record contract with Enja Records. The New York radio WKZE says, “ fresh and world class”.