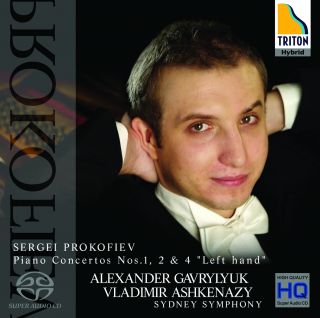 Catalog number: EXCL 44
Releasedate: 29-10-10
According to panist Alexander Gavrylyuk it is all about not only playing the notes themselves but totally becoming the notes. The art is to penetrate in such a way the essence of the score, that you emotionally become one with the music you play. This is exactly what the young pianist does, together with Prokofiev-connaisseur Vladimir Ashkenazy and his orchestra.
Three piano concertos of Sergei Prokofiev on this new CD.
This is the third live & session recording series of Sydney Symphony and Mr. Ashkenazy's "Composer Festival", featuring Prokofiev in 2009, following Rachmaninov (2007) and Elgar (2008). This Prokofiev series also includes complete piano concertos with Russian pianist Alexander Gavrylyuk.

Prokofiev set about composing his Piano Concerto No. 1 in 1911 and in 1912 the work was finished. It is a one-movement concerto, and lasts around 16 and a half minute in the interpretation of Gavrylyuk/Ashkenazy.

In the same year 1912 Sergei Prokofiev began to work out his Piano Concerto No. 2 in G minor, Op. 16 which was completed in 1913. He himself performed this as a solo pianist, at the premiere  on August 23 in 1913. The concerto has quite a temperament and some people in the audience were taken by it and others firmly opposed to its modernistic sound. Nowadays people recognize it as the masterpiece which it is.

Sergei Prokofiev's Piano Concerto No. 4 in B-flat major for the left hand, Op. 53, was commissioned by the one-armed pianist Paul Wittgenstein and completed in 1931.

At his graduation competition, Prokofiev performed his first piano concerto because he figured he had a better chance of winning if the judges didn’t know the music (he was right!). In this program of the festival, Alexander Gavrylyuk takes the spotlight to perform this dazzling, bravura work. (source: Sydney Symphony Orchestra)

Underneath Prokofiev’s cheeky wit, sarcasm and brilliance was a romantic soul, which audiences will discover in his Third Piano Concerto the romantic Prokofiev shines through when Alexander Gavrylyuk joins Ashkenazy and the Sydney Symphony. Prokofiev was capable of lyrical and irresistible melodies. (source: Sydney Symphony Orchestra)

“In the end, he (Prokofiev) was just another human being who tried to express this in his music” - Vladimir Ashkenazy


Alexander Gavrylyuk began his piano studies at the age of seven and gave his first concerto performance when he was nine years old. The next big step for Alexander was going to compete at the 3rd Horowitz International Piano Competition and winning the coveted First prize and Gold medal in 1999. Alexander Gavrylyuk was proclaimed as "the best sixteen year old pianist of the late twentieth century" by critics in Japan in November 2000, after winning the First Prize of the prestigious Hamamatsu International Piano Competition in Japan. He was 16 years old in a field of competitors ranging in age from 16 to 32. Alexander returns regularly to Japan, touring and performing to a full house in Suntory Hall and Tokyo Opera City Hall. His first two CD's were recorded in Japan. In 2003 he joined the honour roll and became a Steinway artist. Alexander performs regularly at the Royal Concertgebouw, the Great Hall of the Moscow Conservatory, Tchaikovsky Hall, Lincoln Center, Sydney Opera House and Suntary Hall.  He has also performed a solo recital at the Kremlin. In April 2005, Alexander Gavrylyuk won the First Prize, the Gold Medal as well as the award for Best Performance of a Classical Concerto at the internationally renowned Arthur Rubinstein International Piano Masters Competition. That same year, VAI International recorded his live performance at the Miami Piano Discoveries Festival, USA, for an international DVD release which went on to receive four and five star ratings in the international press. In May 2007 he recorded his second DVD with VAI. In 2009 Alexander recorded the complete Prokofiev Concerti with Vladirmir Ashkenazy and the Sydney Symphony Orchestra.