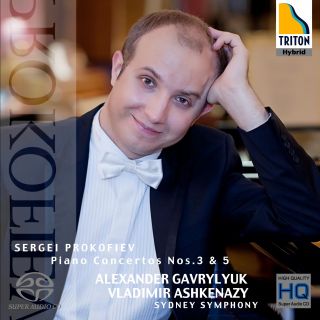 "Prokofiev's first, third and fifth piano concertos are some of the most ferociously taxing in the repertory. Gavrylyuk easily surmounted their challenges with a seductive mixture of brilliance and sensitivity. Relentless torrents of notes and chords were not only dispatched with stunning speed, power, clarity and precision. They were also shaped with purpose and insight. By contrast, Gavrylyuk's deft lightness of touch, rhythmic alertness, and tonal variety (sparklingly bright in faster passages; warmly refined in slower, softer sections) captured Prokofiev's trademark moments of wistful introspection and mercurial playfulness."- The Australian about the performance in the concerts/live recordings for this cd


Alexander Gavrylyuk began his piano studies at the age of seven and gave his first concerto performance when he was nine years old. The next big step for Alexander was going to compete at the 3rd Horowitz International Piano Competition and winning the coveted First prize and Gold medal in 1999. Alexander Gavrylyuk was proclaimed as "the best sixteen year old pianist of the late twentieth century" by critics in Japan in November 2000, after winning the First Prize of the prestigious Hamamatsu International Piano Competition in Japan. He was 16 years old in a field of competitors ranging in age from 16 to 32. Alexander returns regularly to Japan, touring and performing to a full house in Suntory Hall and Tokyo Opera City Hall. His first two CD's were recorded in Japan. In 2003 he joined the honour roll and became a Steinway artist. Alexander performs regularly at the Royal Concertgebouw, the Great Hall of the Moscow Conservatory, Tchaikovsky Hall, Lincoln Center, Sydney Opera House and Suntary Hall.  He has also performed a solo recital at the Kremlin. In April 2005, Alexander Gavrylyuk won the First Prize, the Gold Medal as well as the award for Best Performance of a Classical Concerto at the internationally renowned Arthur Rubinstein International Piano Masters Competition. That same year, VAI International recorded his live performance at the Miami Piano Discoveries Festival, USA, for an international DVD release which went on to receive four and five star ratings in the international press. In May 2007 he recorded his second DVD with VAI. In 2009 Alexander recorded the complete Prokofiev Concerti with Vladirmir Ashkenazy and the Sydney Symphony Orchestra.