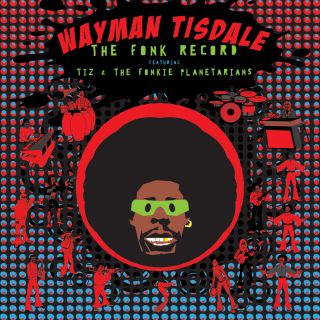 After a stellar career that produced eight top-selling jazz CDs and one gospel project, prepare yourself for a different side of Wayman Tisdale—one that was 12 years in the making! It’s The Fonk Record, which Mack Avenue Records will release on its Rendezvous imprint on October 26, 2010. Featuring 11 original songs, Tisdale’s own funky vocals and a crew of down-and-dirty musicians, The Fonk Record also boasts three guest stars with extensive funk résumés—George Clinton, George Duke and Ali Woodson.

To those who knew him best, it seemed only natural that Tisdale would craft a funk project. “He always wanted to make funk music,” says Derek (DOA) Allen, who produced The Fonk Record and was one of Tisdale’s closest friends. “People are going to see a whole ‘nother side of Wayman on this record—he was on a mission to play as hard and funky as he could.” Tisdale confided in Allen that a funk project was something he always wanted to do. At first it was a playful joke with a few demos here and there. Inspired by great funk artists like Bootsy Collins and Robert Wilson of the Gap Band, Tisdale created his own funky moniker: Tiz and named his band The Fonkie Planetarians. His power source came from Stinky the Sock! Those who were lucky enough to catch Tisdale in concert got a glimpse of his alter ego when he’d perform 20 to 30-minute funk-filled interludes during his jazz shows. “If you saw it, you knew it was the most explosive part of his show,” Allen says. “That’s when the party got started!”

But Tisdale was way too busy with his successful jazz career to focus attention on his fonk. Between hosting jazz cruises, headlining tours, and being an active and loving husband and father, there wasn’t much time. One thing changed that: a diagnosis of cancer in 2007. Tisdale could not ignore his alter ego any longer. “He spent the last two years of his life finishing The Fonk Record,” says Allen. “Only he knew, when no one else did, that God was going to call him home. While he was in the hospital getting chemotherapy, he used funk music as therapy. I would send him files to listen to and it was part of the healing process. When he died, he was at peace.”

The Fonk Record cover features a colorful illustration of Tisdale sporting an Afro and green shades. “It was all part of the concept,” Allen says. “Wayman wanted to put on an Afro wig and a gold tooth, strap on his funky bass and walk down the streets of L.A. to meet record company executives.” Inside the CD, Tisdale’s transformation from a jazz musician to a funk master is portrayed comic-book style. The fonk begins with “The Introduction,” in which Tisdale welcomes listeners to “WTIZ, where it’s not simulated, it’s authenticated.” He also explains a little about the CD and what listeners can expect. The intro leads to the first big collaboration, “Let’s Ride,” featuring George Duke, who wields his magic dukey stick on some hard-charging synthesizer solos as Tisdale channels his best Larry Blackmon, while also displaying his own vocal chops. Next is “This Fonk Is 4U” with the unmistakable vocals of George Clinton. The late Ali Woodson of the Temptations joins Tisdale on the slow-jam sweetness and strings of “Been Here Before.” “Sunshine” is another slow-jam gem—this time with wailing rock guitars. “Neck Bones” and “If U Really Want To Know (I Like It Fonk-Kaa)” show that Tisdale certainly has put his own stamp on the funk legacy.

The Fonk Record was a labor of love for Tisdale, as well as for Allen. It was back in the late 80s that Allen met Tisdale one night at Arco Arena in Sacramento. Allen was playing bass for Janet Jackson, and Tisdale—at that time a star power forward for the NBA’s Sacramento Kings—was watching from the sidelines. “He said he was a bass player too and that we should hook up,” says Allen, who would go on to appear on several of Tisdale’s recordings, including 2008’s Rebound, the final jazz release of Tisdale’s career. “I watched him go from being a very good bass player to becoming a great bass player.”

Allen says all funk fans will enjoy The Fonk Record. “We tried to make it sound authentic—real raw and greasy funk, like back in the 70s.” Although due to necessity, most of the CD was recorded through sharing files online, Allen says the final product captures the warm sound of an analog recording completed as if all musicians were in the recording studio together. The CD features drummer Arthur Thompson, horn arranger Joey Summerfield and guitarist Perry Hardin, among others. “We didn’t want to over-process the sound, and we played old guitars and old synthesizers that Wayman used. We left it raw.”
There’s no doubt The Fonk Record will appeal also to longtime Tisdale followers. Allen is sure of that. One reason is Tisdale’s biggest radio hits were his unique interpretations of funk and R&B classics: “Ain’t No Stoppin’ Us Now,” “Get Down On It” and “Can’t Hide Love.” Another reason is Tisdale simply makes great music. “This is like his earlier records where he had a heavy R&B influence. He came out the box crackin’; the production was a little edgier. Smooth Jazz audiences will love The Fonk Record because they’ll want to have the last thing Wayman did musically. It’s an historic album and they’ll see more of Wayman’s personality and character. They’ll make a personal connection with Wayman through the last part of his life.”

Tisdale’s life has always been full of personality and character. Born in Fort Worth, Texas in 1964 and raised in Tulsa, Oklahoma, Tisdale excelled at basketball and was one of the most-recruited high school players in the country. Tisdale chose the University of Oklahoma where he played from 1983 to 1985. An All-American for three years, Tisdale also played on the 1984 U.S. Olympic team, helping to bring home the gold. In 1986 the Indiana Pacers selected Tisdale as the No. 2 overall draft pick behind Patrick Ewing. Tisdale left his mark on the NBA with the Pacers, Sacramento Kings and Phoenix Suns, scoring more than 12,800 points and pulling down more than 5,000 rebounds in a 12-year career.

Before retiring from pro basketball after the 1997 season, Tisdale had already made the transition to his music career. In 1995 he released his debut CD, appropriately titled Power Forward, which climbed to No. 4 on Billboard's Contemporary Jazz chart and, like all of his subsequent efforts, crossed over onto the R&B charts. His discography includes In The Zone, Decisions, Face To Face, 21 Days, Hang Time, Way Up! and Rebound (the last three are available on Rendezvous).

After Tisdale succumbed to cancer on May 15, 2009, the awards kept coming for the man talented enough to have two highly successful careers. He received a rare posthumous award from The Oklahoma Hall of Fame in Oklahoma City; it’s the highest award Oklahomans can receive. Previous honorees included aviator Wiley Post in 2004 and musician Woody Guthrie in 2006. The award was accepted by Tisdale’s widow, Regina. The Oklahoma Jazz Hall of Fame in Tulsa also posthumously honored Tisdale at its 21st Annual Hall of Fame Induction Gala as a 2009 jazz inductee. It was only seven years earlier, in 2002, that Tisdale was inducted into the Oklahoma Jazz Hall of Fame with an Inaugural Legacy Tribute Award for up-and-coming musicians. Also in 2009 the National Collegiate Basketball Hall of Fame inducted Tisdale, along with Michigan State’s Magic Johnson and Indiana’s Larry Bird, for his outstanding basketball career at the University of Oklahoma.

On October 29, 2010 the Inaugural American Smooth Jazz Awards in Chicago will bestow the Wayman Tisdale Humanitarian Award to a musician who strove to bring a better quality of life to all people. Meanwhile the Oasis Contemporary Jazz Awards has chosen Tisdale’s No. 1 hit, “Ain’t No Stoppin’ Us Now” as its theme song when it convenes in March 2011 in San Diego.

Earlier in 2010, community leaders broke ground on the $20 million University of Oklahoma Wayman Tisdale Specialty Health Center in Tulsa. The health center will carry forward Tisdale’s commitment of caring by bringing specialty medicine to underserved residents in the surrounding Tulsa area. It was Tisdale’s battle with cancer that led him to form the Wayman Tisdale Foundation and to also align himself with the University of Oklahoma OU Cancer Institute.