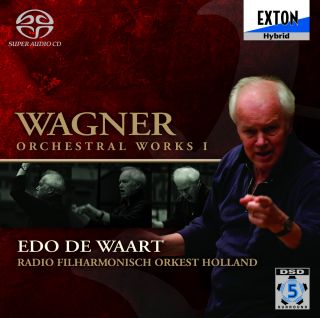 Catalog number: OVCL 153
Releasedate: 07-01-11
During his tenure as the chief conductor of Netherland Radio Philharmonic, Edo de Waart established one of the best culminations the orchestra has ever had. The disc features the most popular repertoire of Wagner, and Edo de Waart, well-known as the opera conductor, directs the skillful orchestra to evoke such a dramatic Wagner world.
Richard Wagner revolutionised the way composers used the orchestra, as he did so many other aspects of music and musical life. In the course of his career, he expanded the standard operatic orchestra of the earlier nineteenth century into a large assembly of instrumental families, capable of being used separately in full harmony as well as being combined in sonorous harmony and clearly defined counterpoint, with an apparently infinite variety of colourings to match the setting and mood of each work and each scene. His writing for individual instruments and sections took full advantage of contemporary developments in playing technique and in the design of the wind instruments. And the expressive and flexible orchestra of his mature operas became essentially, not an accompaniment to the singers, but the leading carrier of the musical line and the embodiment of the characters’ thoughts, feelings and memories – so that the preludes for the orchestra alone formed an integral part of the drama. (From the CD linernote by Anthony Burton © 2010)

As one of the flagship orchestras for the Dutch Broadcasting Authority, the Netherlands Radio Philharmonic occupies a prominent place in two series at the Amsterdam Concertgebouw, the Saturday Matinee and the Sunday Morning Concerts as well as the Friday Vredenburg series in Utrecht. All concerts are broadcast live on the Dutch national station, Radio 4 and through the international European Broadcasting Union connection.

A leading light on the Dutch musical firmament, the Netherlands Radio Philharmonic Orchestra guarantees adventurous symphonic programming, high quality performance and a plethora of concertante opera  performances. World premieres and Dutch premieres of works by among others Koechlin, Martin, Franssens, Koolmees, Padding, Francesconi, Janácek, De Raaff, Oetsvolskaja, Vriend and Rijnvos were praised by critics and audience. The orchestra’s discography is impressive and includes the complete Mahler Symphonies and orchestral works by Rachmaninoff under the direction of Edo de Waart. Ongoing recording projects include a Bruckner-cycle under the direction of Jaap van Zweden (Exton label) and the complete Shostakovich symphonies led by the British conductor Mark Wigglesworth (Bis label). Wagner’s Lohengrin and Die Meistersinger von Nürnberg, performed by the Netherlands Radio Philharmonic Orchestra, the Netherlands Radio Choir and vocal soloists under the direction of Jaap van Zweden, were recorded for QuattroLive and met with great critical acclaim. QuattroLive is the cd label of Radio 4, the Netherlands Broadcasting Music Center, Radio Netherlands Worldwide and the broadcasters NPS, AVRO and TROS.