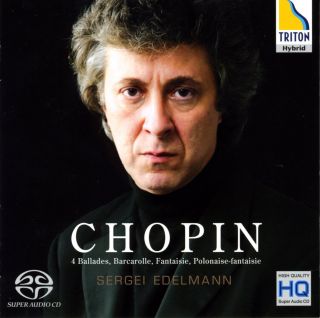 Catalog number: OVCT 58
Releasedate: 07-01-11
The pianist, Sergei Edelmann has certainly established himself as a significant, highly acclaimed pianist of his generation. Devoting considerable amount of his time to teaching, and after silence in the recording market, finally he started his new era with a new recording series with EXTON/TRITON. This disc shows his splendid pianism at the hight of a mature master of music.

In a review of some of Chopin’s piano music in 1841, Robert Schumann praised the “significant originality” of his Polish-French contemporary, evident in “an abundance of new forms which, in their tenderness and daring alike, deserve admiration” (Henry Pleasants’s translation). Some of these new forms were matched by new titles. For example, Chopin borrowed the word “ballade” from poetry and song for four independent pieces in 6/4 or 6/8 time (two groups of three beats to the bar), all with a strong feeling of narrative. Schumann reported a remark by Chopin that his ballades had been prompted by the poetry of his compatriot Mickiewicz. But this may be a matter of atmosphere rather than of story-lines: despite much speculation, links with specific poems have never been conclusively proved. What is certain is that each of the ballades has its own formal structure, and with it a distinct emotional trajectory; and in each case the structure provides a perfect platform for Chopin’s fertile invention of memorable melodies, allied to striking piano textures and figuration.

These striking, memorable melodies are played with the utmost virtuosity and depth by the mature piano master Sergei Edelmann!

Sergei Edelmann
Born in Lvov, Ukraine in 1960, Sergei Edelmann comes from a long and outstanding musical heritage; his father, Alexander Edelmann, renowned pianist and pedagogue, a pupil of both Felix Blumenfeld (professor of Vladimir Horowitz) and Heinrich Neuhaus (professor of Sviatoslav Richter) taught Sergei since the age of 5. In his native country, Sergei’s first orchestral performance was at the age of 10 playing Beethoven’s First Piano Concerto. He subsequently performed extensively in recitals and with orchestras throughout ex-USSR.

Sergei Edelmann came to the United States in 1979. Within his first year here, he quickly established himself as a significant and highly acclaimed pianist of his generation. Not long after his debut performance in the United States, one of Los Angeles’s major concert critics described the excitement generated by Sergei’s performance: “Music reviewing, as a profession has its perils, but one of its rewards is the shock of unexpectedly stumbling onto great talent. That happened last night when this young pianist, Sergei Edelmann, gave a recital to our full house audience”. And, after his debut recital in Chicago’s Orchestra Hall, one of the most respected and feared musical critics, Claudia Cassidy, wrote in the Chicago Magazine: “Sergei Edelmann walked in the Orchestra Hall a stranger and out of it one to be cherished”.
Sergei Edelmann has since become a leading artist both in the concert hall and in the recording studio. His BMG Classics/RCA Red Seal CDs with the Bamberg Symphony under the baton of Claus Peter Flor and the Stockholm Philharmonic Orchestra with Paavo Berglund include both Mendelssohn concertos and the Strauss Burlesque, and his series of solo recordings of Beethoven, Schubert, Schumann, Chopin, and Prokofiev, have gathered enthusiastic critical acclaim.