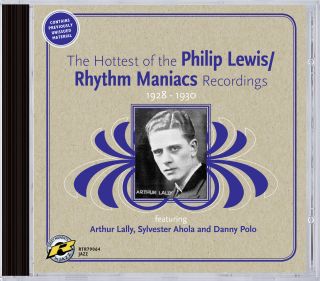 The Hottest of the Philip Lewis/Rhythm Maniacs Recordings

Catalog number: RTR 79064
Releasedate: 28-01-11
In May 1940 Arthur Lally was found dead at his home, probably suicide. This was a tragic and premature end to a distinguished career as a fine musician and arranger, because the jazz-flavoured sound of the Philip Lewis/Rhythm Maniacs sessions owed much to saxophonist Arthur Lally. The recordings on this CD are amongst the very best examples of his work. A hot British dance band, a superb collection of historic recordings as we are used of Retrieval.
When stockbroker Edward Lewis (later Sir Edward Lewis) founded the Decca Record Co Ltd in February 1929, he set his sights on delivering a top quality product featuring the best artists across a wide range of musical genres – from the classics to dance music. Despite initial technical problems and tough times due to the Depression in the early 1930s, the company prospered under Edward Lewis' guidance. While other independents floundered and went out of business in the 1930s – or were sucked up by the EMI colossus – Decca alone maintained its independence and eventually grew to rival even EMI, taking over American Brunswick in 1932 and Crystallate (makers of Imperial, Eclipse, Rex and Crown records) in 1937.

The first dance band record Decca issued (on its premium Magenta-coloured label) was by Ambrose and his Orchestra, which at the time rivalled that of Jack Hylton as the country's top dance band. Decca also decided to set up its own house band, similar to The New Mayfair Dance Orchestra at HMV, and Bert and John Firman's various aggregations at Zonophone. The latter included The Rhythmic Eight, a group that played uncompromisingly hot music, and which has been the subject of an earlier Retrieval reissue (The Rhythmic Eight - 48 of the Best; RTR 79059).

As with The Rhythmic Eight over at Zonophone, the jazz-flavoured sound of the Philip Lewis/Rhythm Maniacs sessions owed much to saxophonist Arthur Lally, as Sylvester Ahola, the trumpet player on these early Decca sides, recalled many years later: "Arthur Lally was the brains, and a very fine musician. Arthur used a similar personnel at Decca to that at Zonophone and we all just naturally played in a similar fashion. He took all the baritone solos, but he also played lead alto and sometimes tenor sax". (source: linernotes by Chris Ellis)


Arthur Vincent Lally was born in Seaforth, just outside Liverpool, in December 1900, the oldest of six children. His father James taught young Arthur to play the cornet; he switched to trombone before his teens, and by 1914 he was also proficient on trumpet, piano, violin and clarinet, and in demand to play for brass bands and orchestras. During World War One, he worked as a steward on the ocean liners, and purchased his first saxophone whilst on shore leave in America.

Once home, he played in a Liverpool dance band, before moving to London, in company with bandleader Fred Spinelly. There he joined the New Columbians, appearing at the Hammersmith Palais de Danse and Rector's Club in Tottenham Court Road, where the Original Dixieland Jazz Band had introduced jazz to Londoners just a few years before. This was followed by a stint with John Birmingham, who was the resident bandleader at the Hotel Cecil prior to Jack Payne's arrival in February 1924. Lally then moved on to Ciro's Club where he played in violinist Jean Lensen's band.

In mid-1926, Lally stepped up in the London dance band scene, joining the famous Savoy Orpheans at the Savoy Hotel, where he playing alongside Herb Finney, an American whose hot alto sax playing was an early influence. Lally remained with the Orpheans until the Spring of  1927, when he joined the band at the Devonshire Restaurant, directed by Bert Firman. Firman was also the Musical Director of Zonophone records, HMV's cheaper sister label, and as a result Lally started recording extensively with the Zonophone house band around this time. In fact, throughout this period, Lally was in constant demand for recording sessions - an article in the Melody Maker claimed that he "....has recorded for nearly every gramophone company in England". Even allowing for journalistic hyperbole, this was no great exaggeration.

In September 1928, Ambrose recruited Arthur Lally to replace American saxophonist Perley Breed, who had returned home. Ambrose was then resident at the exclusive May Fair Hotel in Berkeley Street, and membership of his orchestra was regarded within the profession as the pinnacle of success. Lally must have impressed Ambrose because, at the end of April 1929, he was appointed leader of Ambrose's subsidiary group The Blue Lyres, which had a long residency at the Dorchester Hotel.

Just under two months later, Lally was also leading the new Decca studio group featured on this CD. As discographer Brian Rust notes in Jazz and Ragtime Records, these recordings are of "a remarkably high standard from the point of view of a hot dance music collector"; indeed, they are amongst the most prized records within the "hot" British dance band category.

Decca's director of music was Philip Lewis, who had a background in light classical music and directing theatre pit orchestras. So far as the new Decca studio group was concerned, Lewis relied heavily on Arthur Lally to suggest which musicians to select. The roster of sidemen included Sylvester Ahola on trumpet, with Danny Polo and Johnny Helfer on reeds, and later Joe Brannelly on banjo, all of whom had already played with Lally in The Rhythmic Eight (and three of whom were members of the Ambrose orchestra). All the recordings from the first two sessions (June 20th and 29th, 1929) were issued as by Philip Lewis and his Dance Orchestra, but from the third session (July 16th, 1929) onwards the pseudonym "The Rhythm Maniacs" started to be used, increasingly so as the months went by.

At the time they were issued, few purchasers had any idea who the musicians involved on these blue label Decca records were – the ascendancy of "star" jazz musicians would not take place until the swing era. It has taken the efforts of a few dedicated discographers and collectors to sort out the complex and ever-shifting personnel of studio bands and give credit where it is due. Brian Rust was one of the first to fully appraise the talents of the musicians on these rare sides.

Sylvester "Hooley" Ahola was born in Gloucester, Massachusetts, on 24th May 1902, of Finnish immigrants. He began drumming at the age of six, switching later to cornet. He played professionally in various New England bands, before joining Paul Specht's outfit in New York in late 1925. In April 1926, the Specht band journeyed to London for a two-month engagement at the Royal Palace Hotel in Kensington. London made such a profound impression on the young trumpeter that he vowed to return if the opportunity arose. Hooley left Specht's outfit in February 1927, then worked in several other well-known New England and New York bands, most notably the California Ramblers, which included Adrian Rollini on bass sax.

In September 1927, Ahola joined the band Rollini assembled for the Club New Yorker, which featured some of the best white jazz musicians of the time, including Bix Beiderbecke and Frankie Trumbauer from Jean Goldkette's band, which had recently split up. Although he only worked alongside Bix for a few weeks, until the club shut down due to poor business, the legendary cornetist exerted a long-lasting influence on Ahola, as many of the recordings he made in Britain testify.

While in New York with Cass Hagan's band, Ahola learned that Reggie Batten, a bandleader from the Savoy Hotel, was in New York looking for a first trumpet player. Such was Hooley's reputation that Batten signed him up straight away without even auditioning him, and Hooley and his wife Saima voyaged to England in mid-December 1927. Initially, he held the first trumpet chair in the New Savoy Orpheans, transferring to Ambrose and his Orchestra at the May Fair Hotel in October 1928, where he stayed until he returned to the USA in September 1931.

The third member of the "front line" for the first couple of sessions was another New Englander, Johnny Helfer, who played clarinet and tenor sax but about whom little else is known. He may have been recruited by Howard Jacobs, because both hailed from Boston, Massachusetts, and when the latter returned from the States in early 1927, Helfer appeared with him in the line-up of the Sylvians at the Berkeley Hotel. Helfer, like Ahola and Lally, was also part of the Firman stable at Zonophone, and also participated in New Mayfair Dance Orchestra recordings under Carroll Gibbons' and then Ray Noble's direction between 1928 and 1930.