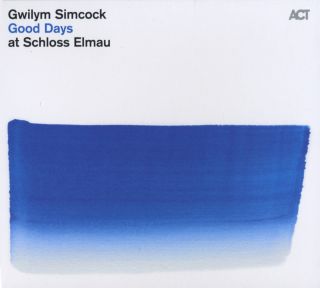 Catalog number: ACT 95012
Releasedate: 07-01-11
The BBC were very impressed by pianist Gwilym Simcock from early on in his career. In 2005,when Simcock was just 24 years old, he won the "Rising Star" Award at the BBC Jazz Awards. A year later he became the first “BBC Radio 3 New Generation Jazz Artist”; a position he held for two years. By 2007 he was awarded the title “Jazz Musician of the Year“ at the British Parliamentary Jazz Awards. His 2008 debut album “Perception” was widely acclaimed in the international press. But it is the praise of his colleagues that is really telling. Chick Corea calls him “an original, a creative genius” whilst fellow Brit Jamie Cullum, the undisputed star of British jazz, said: “He is our best young pianist.”

The young Welshman is clearly on a par with new stars such as Vijay Iyer, Yaron Herman and Michael Wollny. He joins them in a series of impressive piano solo albums on ACT. “Good Days at Schloss Elmau” features eight pieces, all his own compositions, inspired by the unique “cultural hideaway” in the Bavarian Alps. As one might expect from a pianist so closely associated with classical music, the spirit of this special place is reflected throughout this recording.

Gwilym did, after all, start out as a classical pianist. At the age of just three his mother and father (a church organist) recognised their son’s talent and very much encouraged it. By the age of seven Simcock started lessons at London’s renowned Trinity College of Music and then went on to Chetham’s School in Manchester. The effects of this early education can still be heard in Simcock’s music today – with his technique and ability to interpret, he could easily have become a successful classical pianist. But at the age of 15 he was given a cassette of jazz music by his improvisation teacher Steve Berry. This included tracks by Keith Jarrett and Pat Metheny that were to change his musical direction and inspire him to study jazz at the Royal Academy of Music where he graduated with distinction and won the coveted Principal's prize.

Simcock’s prodigious talent soon became well known in jazz circles and he played with greats such as Dave Holland, Lee Konitz and Bob Mintzer and was also a regular member of Bill Bruford’s “Earthworks” even before recording his first CD. The wide-reaching appeal of his work to his musical colleagues and his fans is apparent on “Good Days at Schloss Elmau” after only a few bars. Simcock has devoured his way through the seas of musical history like a shark. Those who listen closely will detect sounds reminiscent of Mozart, Bach, Chopin, Ravel, Gershwin or Ligeti, as well as George Shearing, Thelonious Monk, Bill Evans, Oscar Peterson, and Keith Jarrett, one of the artists who triggered Simcock’s passion for jazz in the first place and to whom he pays brilliant hommage on “Northern Smiles“ (a play on Jarrett’s “Southern Smiles“). Simcock is an eclectic pianist, a true craftsman, capable of creating a huge range of textures and sonorities with his instrument. He is one of the few brilliant players who has succeeded in finding his own style. “When you are young, you think the most important thing is to achieve technical control of your instrument. You later realise that this only works if you find the right approach and drive your music with inspiration and energy.”

This is how a Neo Romantic is, creating soaring and swirling tunes (like the 13-minute “Can We Still Be Friends?“) using every influence from classical music to sixties' pop to jazz standards. Tunes which simply burst with exciting ideas and character travel to a myriad of places, and yet, as if steered by a their own navigation system, always find their way back to the main theme.
His rhythmic feel is very strong (which becomes clear right from the beginning with the intense syncopation of the rousing opening track “These Are The Good Days”), his harmony is extravagant (as can be heard in the chromatic runs of “Gripper”), but the most distinctive thing about his music is its special sound. “I want to hear the piano sing. I have to hear melodies in my head when I improvise,” he says.