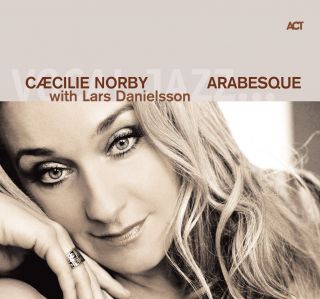 Musical pigeonholes have never interested Danish singer Cæcilie Norby: “I have always been in search of catchy melodies – if you want to have a hit in the pop world, you need a strong melody. In jazz the central subject is that which opens a piece and, in classical music, even the grandest orchestral arrangements may become boring and flat if they aren’t carried by a natural melody.” For Norby it is the melody that is the essence of music, and the decisive criteria according to which she evaluates and chooses music which is free of any genre boundaries. It is an approach which mirrors her extraordinary career and is probably also the secret of her success.

As the daughter of classical musicians – her mother, Solveig Lumholt, was an opera singer and her father, Erik Norby, was a composer – it was the discovery of jazz with its bluesy, swinging and cool moments which brought the decision to follow in her parents’ footsteps. A short while later, whilst still a teenager, she got caught up in the maelstrom of rock and pop music with its raw energy and catchy tunes. As a traveller between these different musical worlds she quickly made a name for herself, beginning with her funk jazz band “Frontline” which won all the Danish jazz awards going in the early Eighties. She then went on to form the pop duo “One Two” with Nina Forsberg, selling a quarter of a million albums in Denmark alone.

Norby is probably the most important figure in Scandinavia to bridge the gap between pop and jazz, which led to her paving the way for colleagues such as Rebekka Bakken, Silje Nergaard and Viktoria Tolstoy. She was the first Scandinavian artist to be signed up to the legendary Blue Note label where she recorded four highly acclaimed and best selling albums. Cæcilie Norby has also worked with many international stars in different genres, from Bugge Wesseltoft (another Scandinavian authority on stylistically open jazz which reaches a wide audience) to Billy Hart, Mike Stern, Chick Corea and Kurt Elling. The most important of these is bassist Lars Danielsson who not only became her husband but also producer and partner on almost all her projects.

This is also the case with her latest project “Arabesque”, her debut for ACT. It is an ambitious, possibly even pioneering project which brings together her career up until now, reflected through the influence of the classical music of her childhood. For the first time, Norby has written song texts for classical pieces, particularly from the Impressionist period (which represents the majority of the 15 tracks on the album). “It was so inspirational that there are many brilliant stories surrounding many of the tracks. Rimsky Korsakov’s “Scheherazade”, for example, is based on the tales of 1001 Nights, and with Ravel’s “Dead Princess”, I thought it would be interesting to write about the fragile side of the flamboyant, lesbian Princess Winnaretta de Polignac, financial backer and impresario of Ravel, Stravinsky and Parisian Bohemian society.” Norby also rediscovered Satie and Debussy and immediately felt at ease with them: “I had no sources or any experience of combining Nordic jazz with classical music but during the first studio session, I felt much closer to Satie than, for example, to Ellington.” The wonderful classical pianist Katrine Gislinge with whom Norby worked together for the first time, can also be heard on the album - “Although we already knew each other when we were children because our parents were best friends,” she says. Finally, the bonus track “How Oft” pays tribute to Norby’s father who also composed the piece.

However, Norby doesn’t only find jazzy sounds in classical melodies – the reverse is also true. On two songs she impressively shows what a “classic” Michel Legrand is, whom she regards as the “most melodic European composer of all times.” The swing standard “Bei mir bist du schoen“ is also transformed into a rousing funk track not least thanks to Wesseltoft’s electronic accompaniment. Norby also includes an unsentimental hymn to “Wholly Earth” by Abbey Lincoln who she greatly respects - although she was unaware of this at the time, the song became a posthumous tribute.

As usual, Norby is accompanied by a hand-picked troop of brilliant musicians besides Danielsson, Wesseltoft and Gislinge, ACT guitar star Ulf Wakenius, trumpeter Palle Mikkelborg, flutist Hans Ulrik as well as drummer and percussionist Anders Engen and Xavier Desandre-Navarre; like her, all fans of great melodies. This is also why “Arabesque” has this immense potential for gaining many enthusiastic followers – not only lovers of classical music, jazz or pop, but also all those who simply love good tunes.