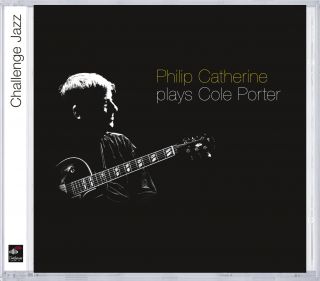 Catalog number: CHR 70166
Releasedate: 29-04-11
He is now considered as the grandfather of Belgian jazz and he continues to play and even better. His debut on Challenge Jazz: Philip Catherine!
John Kelman of Allaboutjazz wrote about Catherine: "Catherine [has the] ability to reference traditional markers from Reinhardt to Wes Montgomery, while sounding like nobody but himself." This pure musician releases his touching vision of Cole Porter on Challenge Jazz with "The Cole Porter Songbook".

"The beauty of a wonderful and seasoned musician like Philip is the fact that anything he plays will have a strong flavor and character. Philip's unique sound is always recognizable, deeply expressive and so very personal. By surrendering to the tune, by simply trying to give the honest rendition of these timeless songs, Philip proved himself to be a great singer. For me making this album was a wonderful experience." - producer Hein Van de Geyn

Philip Catherine has been on the forefront of the European jazz scene since the sixties. He has worked with great artists like Lou Bennett, Billy Brooks, Edgar Bateman, John Lee, Gerry Brown, Jean Luc Ponty, Larry Coryell, Alphonse Mouzon, Charlie Mariano, Niels Henning Orsted Pedersen, Kenny Drew, Dexter Gordon, Toots Thielemans, Stéphane Grappelli, Charles Mingus, Chet Baker, Tom Harrell, the rock group Focus. His unique approach and sound, his dedication to music and, above all, the highly emotional lyricism of expression in his playing and in his music, have been important and influential.

Philip Catherine was born in London in 1942. Coming from a musical family (his grandfather was first violin with the London Symphony Orchestra), he developed a musical ear from an early age. He took up the guitar after having heard George Brassens, and then started listening to all the great jazzmen of the period. Very soon he had the opportunity to meet some of them, and often play with them when they were performing in Belgium where his family had moved to by then. (source: www.philipcatherine.com)