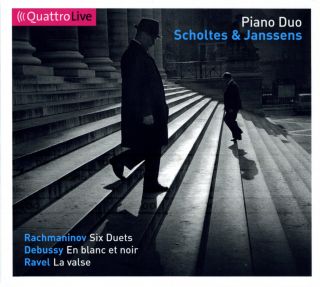 Catalog number: QL 201002
Releasedate: 26-11-10
Their 2009 Carnegie Hall debut, as part of the IBLA Grand Prize winners USA tour, was praised as ‘it could well have been 25 or 30 fingers, so big and well integrated was the sound. Terrific duo in top form'. The Scholtes & Janssens duo is well known for their brilliant sound and marvellous technical skills, presenting very intense and energetic performances. On this extraordinary CD the duo presents some lovely four hand pieces and works for two piano's. We will be hearing a lot more of this piano duo in future!

Exhibiting very changeable characters, the "Six Duets" is the most important work for piano four hands that Rachmaninov wrote, but unfortunately, it is not often performed.
Claude Debussy composed "En blanc et noir" - for two pianos - in 1915. It was one of his last works. The title makes reference to the white and black keys of the piano, some passages played entirely on the white or black keys. Yet Debussy was also alluding to the respective characters of the movements. The open and energetic first movement and the sparkling third movement (dedicated to Stravinsky) correlate with the notion of blanc, while the dark middle movement represents noir, Debussy having dedicated it to his friend Jacques Charlot who was killed in the First World War. The French composer Maurice Ravel is, like Debussy, also considered one of the most important impressionists in classical music. He often reverted to traditional classical forms, combining these with influences from other musical styles such as jazz and blues and various kinds of dances like the waltz, habanera and bolero. "La valse" is unique and compelling from the very first tremolo to the virtuoso, almost chaotic, end. Renowned for his orchestrations and piano transcriptions, Ravel arranged his original orchestral version for two pianos.

The Scholtes & Janssens duo is well known for their brilliant sound and marvellous technical skills, presenting very intense and energetic performances. They do this with the beautiful works of Rachmaninov, Debussy and Ravel on this Quattro Live debut!

Lestari Scholtes (1984) and Gwylim Janssens (1985) have been a piano duo since 2003. Currently they are recognized as one of the most promising piano duos of their generation, and leading piano duo from the Netherlands.

Their 2009 Carnegie Hall debut, as part of the IBLA Grand Prize winners USA tour, was praised as ‘it could well have been 25 or 30 fingers, so big and well integrated was the sound. Terrific duo in top form'. The duo is well known for their brilliant sound and marvellous technical skills, presenting very intense and energetic performances. This has lead them to performances throughout The Netherlands, Belgium, Germany, France, Denmark, Poland, Italy, Israel and the USA. They regularly play in prestigious venues like the Amsterdam Concertgebouw. Their performances have been broadcast by radio and television in multiple countries. Furthermore they performed several times with the Orchestra of Brabant.

In May 2010, the Scholtes-Janssens Piano Duo won the very prestigious Vriendenkrans Competition of the Concertgebouw Amsterdam. They were presented as the first winners of the Radio4 Talent of the Year 2010. The finals, live broadcasted on the Dutch national classical radio, followed after a successful tour in the concert series 'The Debut' in all major concert halls of The Netherlands. In the preliminary rounds of the competition, in autumn 2008, the duo won already the Radio4 Scholarship. In 2010, the duo won also the Concours Musical de France in Paris in the highest category, the 3rd prize in the IVth International Piano Competition of the Republic of San Marino “Allegro Vivo” and the 2nd prize in the 14th Torneo Internazionale di Musica in Verona.

In April and May 2009 The Scholtes-Janssens Piano Duo has made a concert tour throughout the United States on the invitation of the IBLA International Music Foundation. They have performed in North Dakota, Virginia, Arkansas and New York, where they had their debut in the famous Carnegie Hall.

In July 2009 Lestari and Gwylim were jurors at the IBLA Grand Prize International Music Competition, which was held on Sicily, Italy.

As a duo they are studying with the piano duo Sivan Silver & Gil Garburg at the Hochschule für Musik und Theater (University of Music and Drama) in Hanover, Germany. Together they have taken many master classes with e.g. Igor Roma, Nikolai Petrov, Alexander Tamir, Victor Derevianko, Alon Goldstein, Peter Takács and Menahem Pressler. The latter was broadcast on Dutch national television.