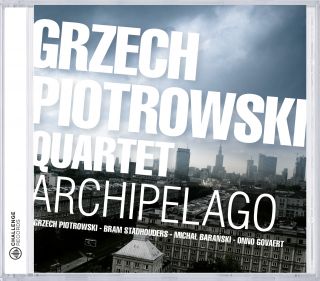 Catalog number: CR 73312
Releasedate: 12-09-11
Rooted in Polish tradition, Eastern and Balkan folklore and the classics power, Grzech Piotrowski  makes his extraordinary music that not only will be a succes in Poland, but, with this debut on Challenge Records the horizon is much broader!
Grzech Piotrowski is with no doubt one of the most interesting personalities in the Polish music world. The figure, which is difficult to close in the concrete frame, because it is a saxophonist, record producer, arranger and publisher (Alchemist Studio). The winner of hearts and awards, a prolific creator and defiant, hailed as the hope of Polish jazz. Balancing on the edge of jazz, folk, new impressionism, film music, nu-jazz and emotronic. Its open stage personality makes the concerts attract people and the music goes directly to the interior. Feature of its formation is that exude power, lyricism, nostalgia, musical metaphor and reverie. At the same time are full of humor and musical distance. He strongly emphasizes that his music is deeply rooted in Polish tradition, Eastern and Balkan folklore and the classics. (source: nor-pol.net)

After listening to the music of Bram Stadhouders and Onno Govaert on myspace, Grzech Piotrowski invited the duo for a serie of 6 concerts in Poland. This was such a success that they recorded a lot of their own music in the studio, right after these concerts. The result can be heard on "EMOQ".

In 1997, along with Robert Luty and Marcin Murawski, Grzech founded the Alchemist, who immediately became a revelation on the Polish jazz scene. The result was the concerts in Europe and numerous awards at jazz festivals in Poland (Jazz on the Oder-Grand Prix, the Jazz Juniors in Krakow, Pomeranian Jazz Autumn-Grand Prix) and most important - the Grand Prix at the Festival Jazz Hoeilaart 1997 in Belgium . The band released three albums in succession: Acoustic Jazz Sextet (1998), Sphere whispers (2001), Dracula in Bucharest (2004). In 2000, also created a very original band, "Oxen" playing music in the style of M-Basic, resulting in the album "Nexo" (2002). This team grew in 2007 to the size of Big Band, and took the name of Big Oxen Band.

The next steps in music were solo album, "Sin" (2005) and "emotronic" (2009), which received very good reviews and showed that it is a musician who follows his individual and original way. In 2007, the artist won the Grand Prix at the Festival of Two Theatres in Sopot for the music for the play 'bass saxophone' Skvoreckiego. This award is summarized from several years of collaboration Piotrowski with Polish Radio Theatre. (source: nor-pol.net)