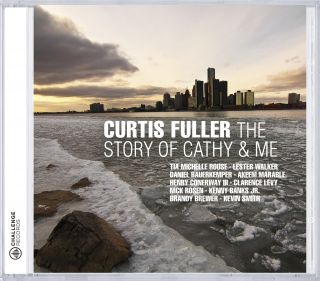 The Story of Cathy & Me

Catalog number: CR 73309
Releasedate: 01-04-11
This CD is a heartfelt homage to Cathy Fuller, who died in 2010. Concerning Cathy and her effect on Curtis Fuller's life, this CD reflects three phases of his life while married to Cathy: How they met. How they lived. How he now lives without her.

This  CD is a reflection of how Curtis is going on without his dear wife of so many years.  If how he survives with the memory of her burning in his heart as he does what he was inescapably meant to do all of his life, play his trombone just as she would have wanted him to do.  When she was with him she vigorously and ambitiously supported and encouraged him as a major pinion in his success-filled life.

This CD begins by emotionally reaching into the deepest grotto of your hearts core, and you’re symbolically Curtis Fuller but for a moment as you feel what he must be feeling, but, of course, he with greater abundance and intensity, an intensity that will follow him indefinitely as his heart hangs low with sadness and regret… and deep, personal memories.

Fuller's parents were Jamaican and died when he was young; he was raised in an orphanage as a result. While in Detroit he was a schoolfriend of Paul Chambers and Donald Byrd, and also knew Tommy Flanagan, Thad Jones and Milt Jackson. After army service between 1953 and 1955 (when he played in a band with Chambers and brothers Cannonball and Nat Adderley), Fuller joined the quintet of Yusef Lateef, another Detroit musician. In 1957 the quintet moved to New York, and Fuller recorded his first sessions as a leader for Prestige Records.

Alfred Lion of Blue Note Records first heard him playing with Miles Davis in the late 1950s, and featured him as a sideman on record dates led by Sonny Clark and John Coltrane; Fuller's work on the latter's Blue Train album is probably his best known recorded performance. Fuller led four dates for Blue Note, though one of these, an album with Slide Hampton, was not issued for many years. Other sideman appearances over the next decade included work on albums under the leadership of Bud Powell, Jimmy Smith, Wayne Shorter, Lee Morgan and Joe Henderson (a former room mate at Wayne State University in 1956).

Fuller was also the first trombonist to be a member of the Art Farmer-Benny Golson Jazztet, later becoming the sixth man in Art Blakey's Jazz Messengers in 1961, staying with Blakey until 1965. In the early 1960s, he recorded two albums as leader for Impulse! Records, having also recorded for Savoy Records and Epic after his obligations to Blue Note had ended. In the late 1960s, he was part of Dizzy Gillespie's band. He went on to tour with Count Basie and also reunited with Blakey and Golson. Along with continuing to perform and record, Fuller is currently a faculty member of the New York State Summer School of the Arts (NYSSSA) School of Jazz Studies (SJS).