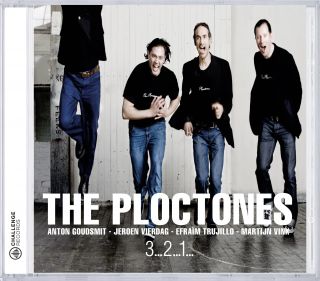 Catalog number: CR 73306
Releasedate: 29-04-11
The Ploctones surprise again with their new release. They are an extremely exiting band with unbelievable muscial creativity. Never a dull moment with these excellent musicians, whether they play for a live audience or we listen to them at home, and fall out of our chairs! 3...2...1..GO!
The four-headed monster is back! After the success of the Challenge-debut "050" The Ploctones are back to surprise us with their intense musical energy. This energy is contagious. The band was ready and very eager to present their 3...2...1..-album to the audience and they did with the smashing cd presentation concert in De Melkweg in Amsterdam on May 14th 2011.
The band has a new drummer: Kristian Krajncan (!) who steps in the footsteps of Martijn Vink. During the presentation concert in Amsterdam, Krajncan also played on the violoncello in the supporting program with dancer Besim Hooti! He is not only a sublime drummer with the same energy and drive in his drumming as the other Ploctone-members, he also has more faces!

See The Ploctones in a video of the Dutch popular daily television show called De Wereld Draait Door (DWDD). The band made their appearance in the show in 2010 when Anton Goudsmit also received the prestigious VPRO Boy Edgar Award!

The Ploctones. A group with a rare solidity, determination and flexibility. A genuine four-headed monster. Whether it concerns a rhythmic tour de force, a fun idea or a tearjerker, the quartet always sounds solid and the group members never cease to surprise each other. The changes and shifting times are whizzing past our ears.

Jeroen Vierdag is a strong and creative bass player who lifts the band up to a higher level with his driving groove and great virtuosity, competing with his 6-string colleague. He's been around in the field of pop, jazz, Latin and Brazilian music.

Martijn Vink is an extremely passionate drummer with a peerless technique. One moment he raises the roof and the next he colors and refines with the subtlety of a musical box. He is the regular drummer of the internationally renowned Metropole Orchestra and collaborated with many jazz giants like Pat Metheny, Herbie Hancock and John Scofield.

Tenor saxophonist Efraim Trujillo stands out in hectic compositions as well as in a more ambient repertoire due to his open and dynamic playing. Because of his abundance of experience and ability to do anything with his instrument he renews and upgrades the music he plays and makes a concert of this group a special experience for the audience and the band members, time and again. Trujillo played with Courtney Pine, Benny Bailey, Steve Williamson and Bootsy Collins among many others.