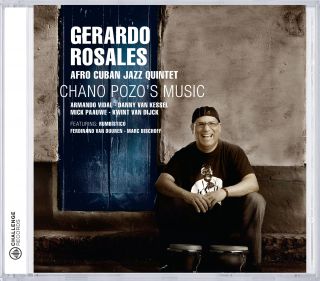 Chano Pozo  is one of a handful of Cuban percussionists who came to the United States in the 1940s and 50s. Other notable congueros who came to the U.S. during that time include Mongo Santamaria, Armando Peraza, Francisco Aguabella, Julito Collazo, Carlos Vidal Bolado and Modesto Duran. Pozo moved to New York City in early 1947 with the encouragement of Miguelito Valdés, and participated in a recording session with Valdés, Arsenio Rodríguez, Carlos Vidal Bolado and José Mangual. In September 1947 he featured with Dizzy Gillespie's Big Band at Carnegie Hall and subsequently on a European tour. Their notable material includes "Cubana Be, Cubana Bop" (written by George Russell), and "Tin Tin Deo" and Manteca (song), both co-written by Pozo.


Gerardo Rosales was born the 6th of July in Caracas, Venezuela. Since 1993 he is living in Europe. At the age of 8 he started studying the piano. At the same time he is interested in playing the congas and bongo.
In 1977, at the age of 13, he gets to know Orlando Poleo, who invites him to study Afro Caribbean percussion at the "Taller de Arte" In the suburb Sarria in his native town Caracas. From 1977 till 1980 he studies congas and bongo with Orlando Poleo and timbales with Alberto Borregales. In 1985 he studies Afro Venezuelan percussion with Alexander Livinali at the "Fundación Bigott".

In 1987 he starts making his career with important figures like Soledad Bravo, Cecilia Todd, Canelita Medina, Alberto Naranjo y el Trabuco Venezolano, Maria Rivas, Joe Ruiz, Ilan Chester, Orquesta Café, trina Medina y Yarake, Victor Cuica and many more. At the same time he founds his own orquestra named "Salsa 70" and with this band he is performing in all the suburbs, theaters and dance halls of the capital. In 1992 he is invited to participate in the Expo Sevilla in Spain with the band "Caracas Son 7". From this moment he decides to stay in Europe.

With his concerts and recordings he has managed to spread and project the rhythms of Venezuela, Cuba, Puerto Rico, Colombia, Peru, Curacao, Surinam.