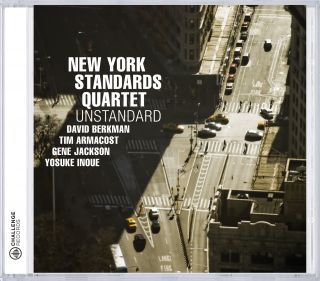 Catalog number: CR 73307
Releasedate: 07-03-11
David Berkman and his fellow musicians have a lot of fun playing jazz standards in their own way. Taking the famous tunes in their hands and making it their own thing, liberates them. The fun they have one can hear clearly on this new CD.
Playing jazzstandards in their own way that was the deal of the New York Standards Quartet. It all comes to PLAYING the well-known tunes and what the musicians do with it. It is not about the tunes itself. The New York Standards Quartet is a band of friends that has been working together for the last 6 years. They have released one other recording, “Live in Tokyo” recorded at an NHK radio broadcast during their Japanese tour of 2006 and have toured and performed at concert venues, clubs and universities in Japan, the United States and Europe.

Since moving to New York in 1985, David Berkman has been an important part of the jazz community. He is an award-winning composer/bandleader (2000 Doris Duke/Chamber Music America New Works Creation and Presentation Grant), a recording artist whose 4 Palmetto recordings have appeared on numerous 'Best Records Of The Year'-critic's lists (the New York Times, the Village Voice, Downbeat, JazzIz, Jazz Times and others) and an award-winning jazz clinician who has performed and taught at numerous jazz camps, universities and conservatories around the United States, South America and Europe. He has played in countless bands including those of Cecil McBee, Tom Harrell and the Vanguard Orchestra and has performed with and/or recorded and/or arranged for numerous jazz luminaries, including: Sonny Stitt,, Brian Blade, Joe Lovano, Dave Douglas, Ray Drummond, Billy Hart, Dick Oatts, Tony Malaby, Chris Potter, Scott Wendholt, Lenny White, Scott Colley, Craig Handy, Steven Bernstein, Bill Stewart, Dave Stryker, Fathead Newman, Hank Crawford, and Jane Monheit. He has published two books with Sher Music Publishing, “The Jazz Musician’s Guide to Creative Practicing” (2007) and “The Jazz Singer’s Guidebook” (2009). Now appearing more and more often as a bandleader, David Berkman has performed solo and with his quartet, quintet and sextet at festivals and clubs in the United States, Europe and Japan, most recently at the North Sea Festival, the Edinburgh Festival, the Belfast Festival and the Cork Festival. Recent tours include: clubs and concert performances in Switzerland, the Netherlands, Austria, Germany, Belgium, Holland, Ireland, Spain, Italy, Brazil, Japan, Korea, New Zealand and around the United States. Recent projects include the New York Standards Quartet (featuring Tim Armacost, Yosuke Inoue and Gene Jackson) and piano/trumpet duo performances with Dave Douglas (2005 International Trumpet Guild Convention in Bangkok) and Tom Harrell (around Italy).