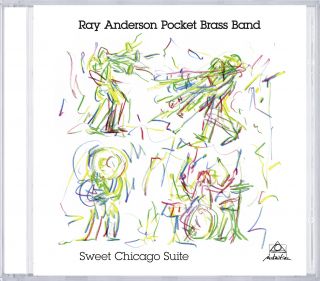 Catalog number: INTCHR 71306
Releasedate: 02-03-12
The Ray Anderson Pocket Brass Band has been one of the most successful Jazz bands in the 1990ies. Now they are back: a brand new recording after the 1998 album on Enja. And they are in good shape, better than ever!
When you listen to the eight tracks of the new album The Sweet Chicago Suite by Ray Anderson's Pocket Brass Band, you often feel breathless, because Ray Anderson, Lew Soloff, Matt Perrine and Bobby Previte play so impressively. With all the power displayed, you can quickly forget that the Pocket Brass Band is really only a quartet. Of course, a good share of the music's roots is in the marching bands from New Orleans; Anderson feels a spiritual bond to this magical place and its music. However, you already notice due to the album name that it is not a tribute to the "Big Easy", but instead to Ray's hometown Chicago.
Ray Anderson: "The Sweet Chicago Suite is both a musical description of Chicago in the 60’s and a reflection on my coming of age. I was born in 1952 in Chicago and grew up in Hyde Park, the small, integrated community on the South Side where the University of Chicago holds sway. The piece meditates on the many powerful forces that buffeted and educated me: my family, the counter-culture of the time, pervasive racism and the civil rights movement, Chicago Police, Blackstone Rangers (a gang of youths, somewhere between a self-appointed militia for protecting residents and the mafia), Vietnam, High School, girls and, of course, music." The first six tracks are from the original version of Sweet Chicago Suite, which Anderson composed and performed for the order of Chamber Music America in 2001.
The English word "brass" signifies not only wind instrument players in German, but also copper coins. In this context, the Pocket Brass Band would be a group whose pocket money is only composed of copper coins. Such a self-mocking pun is certainly something that Ray Anderson is more than capable of. After all, he likes to present his music with a wink of the eye, even if he adamantly rejects the insinuation that he would play merry music. This man means it seriously, in such a merry way that is transmitted directly to the listener.

Anderson left Chicago, where he had started his music studies, at the beginning of the 70s and went first to the west coast and later to New York. As a teenager, he already played alongside Anthony Braxton, David Murray and his fellow student George Lewis. At the same time, he soaked up the sounds of James Brown, Sly and the Family Stone and Jimi Hendrix and joined R&B and funk bands. He was a member of the bands of Jimmy Guiffre and Barry Altschul at the beginning of his twenties. Then he founded the Slickaphonics. However, his trombone can also be heard on albums by Luther Allison, Bluesiana (with Dr. John) and even Hall & Oates.
Lew Soloff started his career in the original band of Blood, Sweat and Tears and has been an established figure in the music world since then. The Internet music encyclopedia "All Music Guide" needs a whole seven pages to list his recordings with Paul Simon (Graceland), James Brown (Reality and Hell), Stanley Clarke (the first three solo albums), Steely Dan (Gold) as well as Miles Davis and Quincy Jones (Live at Montreux) completely.
Bobby Previte has also continually played along the boundaries between rock and jazz and has already refined recordings by John Zorn, Charlie Hunter and Wayne Horvitz as well as Tom Waits and Sonic Youth.
Finally, Mat Perrine has of course a difficult time as a "virtuoso sousaphone player" (Downbeat Magazine) to keep up with the "Who Is Who" of his fellow musicians. However, the master of his trade has already been invited to play on recordings by Marianne Faithfull, Bruce Hornsby and Harry Connick Jr. He grew up in Sacramento, CA, moved to New Orleans in 1992 as a logical consequence and has been regarded as a local hero there since then, regardless of whether in rock, funk, hip hop or jazz.