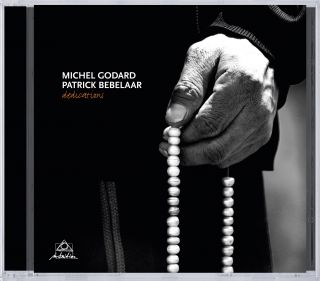 Catalog number: INT 34342
Releasedate: 01-04-11
Friendship is the fundament on which this duo recording is built: two connoisoirs of jazz (and food!) sum up musically their experiences over the last 10 years as a duo. beauty is a rare thing - here you can find it...
Effortlessness and beautiful sounds, peacefulness and power, transparency and buoyancy… Those are only a few of the attributes, with which you could associate "Dedications" by the duo Michel Godard and Patrick Bebelaar. Or let's reduce it to a catchword: Pleasure! Pleasure topics also seem to have influenced a few compositions on "Dedications". For example, "Archangelika" is nothing other than the appetite for and digestion of stimulating angelica. Or we treat ourselves with "Philtre" to a magic potion, willingly with aphrodisiac effect. Finally, the celebrity chef Vincent Klink gets a comprehensive serenade with "One For Vince". In turn, Vincent gives thanks with the writing of a hymn of praise to the duo, which can be read in the booklet of "Dedications". Excerpt: Both musicians are also unprecedented outside of their careers in music, i.e., they are real connoisseurs in other areas too. Whoever observes them at dinner or in the kitchen senses their vibrant sensuality. As next to last piece, there is an interweaving of two nocturnal classics, the only composition by others on the album. It starts with Monk's "Round Midnight". Godard and Bebelaar then swing into the second part almost unnoticed. "Mbube" is a composition by the South African Solomon Linda from the 1920s. This song became a big hit for the Tokens with the title "The Lion Sleeps Tonight" in 1961.

Michel Godard, born in 1960, has dedicated himself to the voluminous tuba with an unconventional, polyphonic playing technique and has belonged to the elite of European jazz for quite some time. He also exhibits his yearning for full-bodied sounds with a bass guitar. His interest in old music is the reason that he has also mastered the tuba predecessor serpent (with a snake-like appearance as the name indicates). In addition to the duo with Patrick Bebelaar, Godard is a member of the group of the oud player Rabih Abou-Khalil.   Pianist Patrick Bebelaar studied at the College of Music in Stuttgart. He was awarded the Baden-Wurttemberg Jazz Prize in the year 2000. He composes for the order of the International  Bach Academy and the German Literature Archives. Concert trips take him repeatedly to South Africa, a country for which he feels a lot of affinity. He has also performed on stage in India, Russia, the USA, Dubai and – of course – Europe. He has performed genre-overlapping with writers such as Peter O. Chotjewitz, Peter Härtling, Oskar Pastior and Wolfgang Kiwus. Bebelaar and Godard have already been working together since the year 2001, documented for the first time on Bebelaar's CD "You Never Lose an Island" (a live recording from June 2002). Godard has also supported Bebelaar in his performances of compositions commissioned for the International Bach Academy.