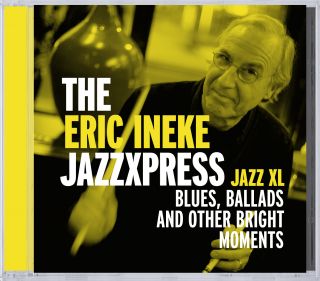 Catalog number: DBCHR 74064
Releasedate: 03-06-11
The Eric Ineke JazzXpress, a swinging band in the hard-bop tradition with a very strong line-up. This album is a live registration, in which a couple of concerts were taped and this is the result: the JazzExpress is riding again, full force ahead!
When Bob Hagen offered my band the opportunity to play in his JazzImpulse Concert Series for the 2008-2009 season, I was pleasantly surprised. The JazzXpress doesn’t often get the chance to perform on a theater circuit, which is usually reserved for music appealing to a wide audience. (We played on double bills with the wonderful singer and piano player Sanna van Vliet.)

The audiences we played for were enthusiastic, and Marius, our bass player and engineer(!), suggested we tape a couple of concerts, allowing us to document the music on this CD. After three studio albums, it was time for a live album where everybody could stretch out a bit more and respond to audience feedback.

Our tour repertoire was a mixture of standards, a few originals written by Johnny Griffin, one by Thelonious Monk and one by Marius Beets. Listening back to the tapes to make a selection for this CD, I was amazed how the band sounded live. The combination of the right spirit, talent, musicianship and swing from Rik Mol, Sjoerd Dijkhuizen, Rob van Bavel and Marius Beets makes me feel proud to be the leader of (and drummer in) this group. (from the linernotes of this CD by Eric Ineke)


Eric Ineke started his career in the sixties. Musicians like Philly Joe Jones, Shelly Manne, Elvin Jones and Tony Williams were his inspiration. In 1969 he made his first record with Ferdinand Povel. From the seventies on Eric played with the Rob Agerbeek Quintet, the legendary Rein de Graaf/Dick Vennik Quartet, the Ben van den Dungen/Jarmo Hoogendijk Quintet and the Piet Noordijk Quartet. During his career he recorded numerous CD’s and toured with many American soloists like Dexter Gordon, Johnny Griffin, George Coleman, Jimmy Raney, Barry Harris, Eric Alexander and David Liebman. For more than 35 years he is the drummer of the Rein de Graaf Trio and appears on numerous national and international Jazzfestivals like Northsea Jazz, Nice, Pescara, San Remo, Athens, Toronto, Montreal and New York. He teaches at the Royal Conservatory and The Koorenhuis in The Hague. Since 2006 he is leading the Eric Ineke JazzXpress, a swinging band in the hard-bop tradition.