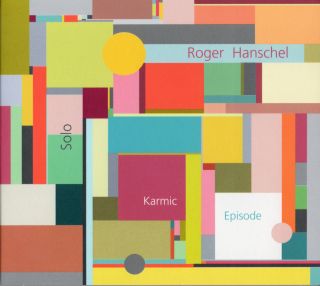 Rogers solo music is characterized by one thing above all: that the antithesis of composition and improvisation
has been suspended. For him they are the proverbial two sides of a coin, with him as the intermediary and
medium between the extremes. One results from the other: a piece of notated music can give Hanschel the impulse
to play a solo leading far from the origin, just as he has his improvisation sound with forms, rhythmic patterns and
harmonic structures, as if they were composted. So, he follows the original meaning of the spiritual guiding principle
“Karma”: from cause and effect, continued into the infinite.

“In its attitude and musical transformation, Roger’s music reminds me of the artistic work of the great german
painter Gerhard Richter; indeed, there are very few musicians who can approach a compositional topic with
such somplete command of the material and instrument and who can work through this with an almost sober
consistency and clarity, in both compositional as well as improvisational senses – and still reach such tender
poetry and bgeauty in the end. For me this is a miracle and, at the same time, a logical consequence of unique and
great art !” HEINRICH VON KALNEIN, Graz.