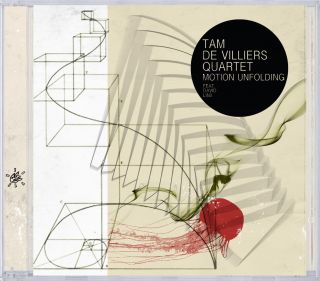 Of course, there is a primus inter pares in the Tam de Villiers 4tet, a fact that the band name makes clear. Tam de Villiers is the composer of the music and lyrics. His lyrics sound so poetic that they even produce an effect without music, or – to put it in a better way – even sound like music. Only someone whose native language is English can write in this way. Tam de Villiers was born in England in 1979 and grew up in South Africa, Scotland and England. He learned to play violin when he was four and took up piano a few years later; he started playing guitar when he was 15. He was awarded a Master's Degree from the Leeds College of Music in 2001. After he moved to Paris in 2003, he studied at the Conservatoire de Montrieul and met teachers and musicians such as Marc Ducret, Stephane Payen and Paul and Fabrizio Cassol.
No one less than Michael Brecker said about the tenor saxophonist David Prez, "David's playing is fluent and swinging. His sound is... exquisite!" Prez not only completed his music studies at the Conservatoire de Lyon with the highest possible distinction in 2000, he also even received personal congratulations from all members of the examination committee. Then he moved to the USA to continue his studies under David Liebman and Michael Brecker.
The Conservatoire National Superieure de Musique de Paris was the last college of many, at which Bruno Schorp studied contrabass and composition. He enjoyed his studies and learned a lot from his teachers Glen Ferris, Daniel Humair and Ricardo Del Fra. In the meantime, he teaches at various conservatories and has been a sideman much in demand in Parisian jazz clubs for quite some time.   Drummer Karl Jannuska was born in Canada where he learned his trade. He has been living in Paris since 2001 and passes on his skill to young people at several conservatories. With his drum art, he has already played alongside of Randy Brecker, Brad Mehldau, Dave Liebman, Kenny Wheeler, Jackie Terrasson, Sheila Jordan and even Louie Bellson (just to name a few).
Guest singer David Linx, a Belgium jazz and chanson singer who lives in France, whose last album (a double CD, which he recorded in duet with Maria Joao) of a total of 17 was issued in 2011, refines two tracks with his striking voice.