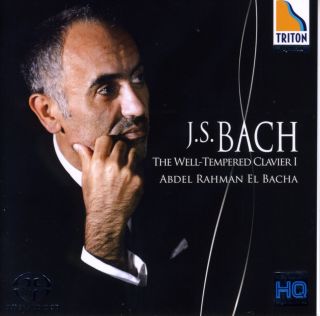 The Well-Tempered Clavier Book I

Catalog number: OVCT 77
Releasedate: 10-05-11
"I decided not to record this work until my 50's." Abdel Rahman El Bacha, the distinctive and accomplished pianist and a winner of the Queen Elisabeth International Competition by a unanimous judgment in 1978, mentioned with this new double CD in his hand. This milestone by J.S.Bach of compositions for Clavier requires certain maturity if you really seek for the truth of this work, and for Mr.El Bacha, the time has come. Specially choosing the Bechstein instrument, he again mentioned that this instrument must be selected for this recording in order for him to have all the sound and color he needs for every note J.S.Bach wrote in this book. (From the CD linernote by Anthony Burton © 2011)
“Bach’s tendency to compile encyclopaedic demonstrations of his art is exemplified by his two books of 24 preludes and fugues in all the major and minor keys, known by the title of “The Well-Tempered Clavier” (Clavier or Klavier simply meaning “keyboard”). The “48”, as the two books together are often called, represents a continuation of a strong German tradition of fugal writing for keyboard, but also a codification of the idea of pairing a freely composed prelude with a self-contained fugue, and of the principles of fugue. The essence of these is a strictly contrapuntal texture in a consistent number of parts or “voices”, albeit freely distributed between the hands, and a concentration on a main theme or “subject” which is introduced in a gradual build-up in all the voices in turn, usually in combination with an almost equally important “counter-subject”.

The two sets were intended primarily for use in Bach’s teaching of keyboard playing and composition, and were not printed in full until more than half a century after the composer’s death. But manuscript copies were widely circulated, and were avidly studied by Mozart and the young Beethoven. Later, the “48” was a significant influence on many other composers, including Robert Schumann, who considered it a musician’s “daily bread”; and in the twentieth century it provided a model for similarly comprehensive sets of preludes and fugues by Hindemith and Shostakovich. Meanwhile, although conceived for the harpsichord and possibly the clavichord, it has become a central part of the repertoire of the ubiquitous keyboard instrument of the nineteenth and twentieth centuries, the piano.

Book I of “The Well-Tempered Clavier” took shape gradually during Bach’s years as Kapellmeister (director of music) at the court of Coethen. It seems to have begun with two series of preludes in the Clavierbuechlein, or “Little Keyboard Book”, that Bach wrote for the education of his nine-year-old son Wilhelm Friedemann in 1720. Soon after that, he paired these preludes with fugues and added further pieces, the new material being either newly written or adapted (and perhaps transposed) from now lost earlier versions. He then expanded many of the preludes as part of a revision of the whole set, which took place probably in 1721 or ’22. He made more revisions in the process of producing a fair copy of the whole work in late 1722 or early 1723; and after his move to Leipzig he continued to adjust details right through to the 1740s – by which time he was also working on the companion Book II.

One model for Bach in his assembly of Book I was Ariadne musica by Johann Caspar Ferdinand Fischer, a 1702 publication consisting of twenty short preludes and fugues for organ in ascending order of key, major and minor. Fischer left out a few keys which in the most common tuning systems of the time would have sounded impossibly out of tune. But Bach was able to fill in the gaps, counting on the use of a more up-to-date system which evened out the compromises inherent in the division of the octave into twelve semitones: perhaps today’s equal temperament, but perhaps a “well-tempered” tuning which retained some of the individual colour of each key. “
(From the CD linernote by Anthony Burton © 2011)


In June 1978, Abdel Rahman El Bacha won the Queen Elisabeth International Competition by a unanimous judgment. He was also awarded the Audience Prize. He was only 19. Born in Beirut in 1958 in a family of musicians, he started his pianolessons in 1967 with Zvart Sarkissian, a pupil of Marguerite Long and Jacques Février. At the age of 10 he gave his first concert with an orchestra. In 1973 Claudio Arrau predicted a great career for him and in 1974 he was offered a scholarship by France, the former USSR and Great Britain. He took up the French offer out of cultural affinity and entered the Paris Conservatoire in the class of Pierre Sancan. He graduated with 4 first prizes (piano, chamber music, harmony and counterpoint).

After the Queen Elisabeth Competition which launched him on the international scene, he chose to bide his time in order to enlarge and further study his repertory. From that moment on, the musical press started comparing him to the greatest pianists, stressing the exceptional qualities of his playing and his emotional power. From the Salzburg Mozarteum to the Paris Théatre des Champs Élysées, from the Berlin Philharmony to the Amsterdam Concertgebouw, he performs today all over Europe, in Russia, Japan, the Midlle East, the U.S.A., Central and South America.

His vast repertory, including almost 60 concertos, is based mainly on the works of Bach, Mozart, Beethoven, Schubert, Chopin, Schumann, Rachmaninov, Ravel and Prokofief. He has performed under eminent conductors with prestigious orchestras such as the Berlin Philharmonic, the Royal Philharmonic, The Orchestre de Paris, the NHK Tokyo, the English Chamber Orchestra, the Orchestre de la Suisse Romande... In 1983, his first recording for the label Forlane, Early Works by Prokofiev, was awarded the "Grand Prix de l’Académie Charles Cros". He received it from the hand of Mrs Prokofiev herself. For the same label he has recorded 3 Concertos by Bach, Ravel’s 2 Concertos and works by Schumann, Ravel, Schubert and Rachmaninov.

His recording of Beethoven’s complete Piano Sonatas, just as his concert performances of these works, were heralded by the press as a "major event". The second CD of these Beethoven recordings, as well as his Ravel recital, were awarded the "Grand Prix de la Nouvelle Académie du Disque Français." For Chopin’s Melodies with Ewa Podleś, he also received the "Gerarld Moore Prize" - best accompanist - from the Académie du Disque Lyrique. He has also recorded Chopin’s complete solo piano works (12 CD) in chronological order.

In March 2002, he obtained a triumph in Nantes, with the complete piano solo works of Chopin given (by heart) in 16 recitals over a period of six days in a row. He renewed this experience at La Roque d’Anthéron Festival in 15 recitals given in July 2003, as well in 2004 at the Sintra Festival (Portugal), beginning of October 2004 in Avignon, and February 2005 in Bruxelles.

The 2 CD of Chopin’s complete works for piano and orchestra, recorded with the Orchestre de Bretagne conducted by Stefan Sanderling are available. For Calliope he also recorded Saint-Saéns 1st & 2nd pianos concertos with Pascal Verrot and the Orchestre Symphonique de Picardie. He realized in 2004 a live recording of the 5 Concertos of Prokofiev with the Orchestre de la Monnaie conducted by Kazushi Ono (Fuga Libera). Recently he has started continual recording projects for Japanese label TRITON / Octavia Records Inc., and the following titles are available now, all of which are highly acclaimed enjoying wonderful reviews; The CD entitled “Russian Virtuoso Piano Works” featuring Balakirev’s Islamey and Stravinsky’s Petrushka etc., Ravel’s Complete Piano Solo Works and J.S.Bach’s Well-Tempered Clavier Book I.

Abdel Rahman El Bacha was granted the double French-Lebanese citizenship in 1981. He is also a composer. He was made "Chevalier des Arts et des Lettres" by the French Minister of Culture in 1998 and he has been awarded the "Médaille de l’Ordre du Mérite" by the President of the Republic of Lebanon, the highest distinction of his native country."