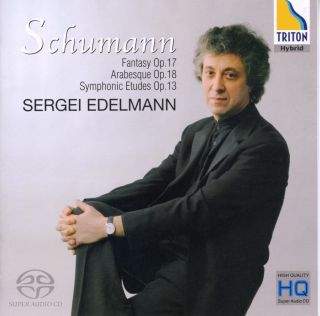 Catalog number: EXCL 25
Releasedate: 10-05-11
Among series of recordings by Sergei Edelmann for TRITON, this disc features Schumann's masterpieces such as Fantasy or Symphonic Etudes, emotionally romantic and structurally formative. Mr.Edelmann, who had once released numerous recordings for RCA, after long silence from the recording market, totally came back with series of splendid recordings for TRITON showing his matured pianism at its culmination. (from the CD linernote by Anthony Burton © 2011)
“Robert Schumann trained as a pianist until suffering from a hand injury, and later fell in love with Clara Wieck, the daughter of his teacher, who was to become one of the foremost concert pianists of her time; after overcoming her father’s opposition, they were eventually married in 1840. Not surprisingly, nearly all the works he composed up to that time, including his first 23 publications with opus numbers, were for solo piano. Much of this music makes exacting demands on the player’s technique, without necessarily sounding like virtuoso display music; all of it is full of innovative textures and sonorities, often placed within freshly invented forms and even genres...”
(from the CD linernote by Anthony Burton © 2011)


Born in Lvov, Ukraine in 1960, Sergei Edelmann comes from a long and outstanding musical heritage; his father, Alexander Edelmann, renowned pianist and pedagogue, a pupil of both Felix Blumenfeld (professor of Vladimir Horowitz) and Heinrich Neuhaus (professor of Sviatoslav Richter) taught Sergei since the age of 5. In his native country, Sergei’s first orchestral performance was at the age of 10 playing Beethoven’s First Piano Concerto. He subsequently performed extensively in recitals and with orchestras throughout Sergei Edelmann came to the United States in 1979. Within his first year here, he quickly established himself as a significant and highly acclaimed pianist of his generation. Not long after his debut performance in the United States, one of Los Angeles’s major concert critics described the excitement generated by Sergei’s performance: “Music reviewing, as a profession has its perils, but one of its rewards is the shock of unexpectedly stumbling onto great talent. That happened last night when this young pianist, Sergei Edelmann, gave a recital to our full house audience”. And, after his debut recital in Chicago’s Orchestra Hall, one of the most respected and feared musical critics, Claudia Cassidy, wrote in the Chicago Magazine: “Sergei Edelmann walked in the Orchestra Hall a stranger and out of it one to be cherished”.

Sergei Edelmann has since become a leading artist both in the concert hall and in the recording studio. His BMG Classics/RCA Red Seal CDs with the Bamberg Symphony under the baton of Claus Peter Flor and the Stockholm Philharmonic Orchestra with Paavo Berglund include both Mendelssohn concertos and the Strauss Burlesque, and his series of solo recordings of Beethoven, Schubert, Schumann, Chopin, and Prokofiev, have gathered enthusiastic critical acclaim.

A true collaborator Mr.Edelmann enjoys festival appearances that afford him the opportunity to work with friends and colleagues. Among his chamber music partners: violinists Philip Hirshhorn, Dora Schwarzberg, Sergei Stadler, Alissa Vaitsner, clarinetists Michel Portal, Pascal Moragues, Julian Milkis and Paul Mayer, violoncellists Mario Brunello, Dmitri Yablonsky and Sviatoslav Zagursky. In France he has appeared in La Rocque d’Antheron, Tours, Dinard, Nancy, Sully and Radio France Montpelier music festivals. He is a regular guest at the Elba International Music Festival in Italy where, over several summer seasons Mr.Edelmann has collaborated with violist Yuri Bashmet, violinist Victor Tretyakov and cellist Mario Brunello. They premiered in Italy Gya Kantcelli’s Piano Quartet and Penderezky Sextet. In September of 2006, at the opening of 10th anniversary Festival, he performed the Schumann piano concerto with “New Russia” Symphony Orchestra conducted by Yuri Bashmet. Following that concert, Mr.Edelmann performed in the Mozart celebration concert with Moscow Soloists at the famed Great Hall of the Moscow Conservatory in December 2006. In January 2008 Mr.Edelmann was invited to be a soloist in J.Brahms Piano concerto No.2 with Sinfonia Warsovia under the direction of Peter Csaba for the tour of Italy.

In addition to his concert activities, Mr.Edelmann devotes a considerable amount of his time to teaching. He was a Professor of the Piano Faculty at New York University from 1996 to 2001 and currently is a Guest Professor of Piano at the Musashino Music Academy in Tokyo until March 2009.