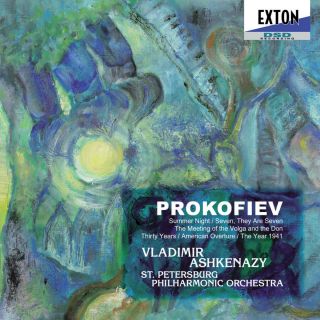 Catalog number: OVCL 323
Releasedate: 22-07-11
This recording was first issued in Japan in 2003, the composer's memorial of 50 year anniversary of his death, featuring repertoire rather rarely performed. However, those works reflect clearly the portrait of the composer who was struggled to survive, as a Russian, the tumultuous first half of 20th century. Mr.Ashkenazy, the musician from Russia who shares the same part of the century, puts a spotlight on those works and provides the best interpretation with Russian orchestra, chorus and soloist.
A 20th-century Russian composer, Sergei Prokofiev (1891-1953) is well known for his symphonic fairy tale "Peter and the Wolf", the ballets "Romeo and Juliet" and "Cinderella", piano sonatas, concertos, and the "Classical Symphony", etc. These representative works, characterized by familiar melodies, lyrics, vivid toccatas, and clarity with a strong tonic emphasis, are still often performed.  On the other hand, the works on this CD are rarely played or recorded. These pieces enable us to imagine the composer living through the violent changes of the first half of the 20th century. Though he never used his music to transmit a radical message, he devoted himself to music. But in fact the circumstances of his life, such as the Russian Revolution, living in foreign countries, World Wars, and the social order of the former Soviet Union which compelled him to compromise, sometimes had a deep influence on his music…
(excerpts from the CD linernote)


Vladimir Ashkenazy’s artistic life encompasses a vast range of activities and offers inspiration to music-lovers across the world. One of the most outstanding pianists of our time, he regularly records new discs such as the 1999 Grammy award-winning Shostakovich Preludes and Fugues and his recent release of French piano duos with Vovka Ashkenazy. In January 2009 he took up the position of Principal Conductor and Artistic Adviser to the Sydney Symphony, and is Conductor Laureate of the Philharmonia, Iceland and NHK Symphony Orchestras and Music Director of the European Union Youth Orchestra.
(the source: from the official website of Harrison Parrott Artist Management)

The St. Petersburg Philharmonic Orchestra, Russia's oldest symphonic ensemble, was founded in 1882- when on the Order of Alexander III, the Court musical choir was established, the prototype of today’s «Honoured Collective of the Russian Federation». In 2007, the orchestra - celebrated its 125th anniversary. The Musicians' Choir was founded to perform in the «royal presence» at receptions and official ceremonies and at the balls, plays and concerts at the Royal Court. The pinnacle of this type of activity was the participation of the choir in 1896 in the pageantry of coronation of Nicholas II. In 1897 the Court Choir became the Court Orchestra and its musicians were transferred from the military department and given the same rights as other actors of royal theatres. In the early 20th century the orchestra was entitled to perform at commercial concerts for the general public.  The series of concerts «Orchestral collections of musical news» saw the first Russian performances of Richard Strauss’ symphonic poems «Ein Heldenleben» and «Also sprach Zarathustra», Mahler’s First Symphony, Bruckner’s Ninth Symphony and Skriabin’s Poem of Ecstasy. The concerts included performances by one author, series of concerts by subscription, «historical series» accompanied by a lecture or an introductory address. Among the conductors were world-renowned musicians: Richard Strauss, Arthur Nikisch, Alexander Glazunov and Serge Koussevitsky.

In 1917 the Orchestra became the State Orchestra and in accordance with the Decree of 1921 it was incorporated into the newly founded Petrograd Philharmonic, the first of its kind in the country. Shortly after, unprecedented tours began with a whole pleiad of western conductors. Their names enjoy unquestioned authority in today’s musical world: Otto Klemperer (the conductor also conducted subscription concerts), Bruno Walter, and Felix Weingartner. As soloists, Vladimir Horowitz and Sergey Prokofiev (with his piano concertos) performed with the orchestra. On the initiative of the foreign conductors, the orchestra began to play the modern repertoire – Stravinsky, Schoenberg, Berg, Hindemith, Honegger and Poulenc. There is also heard the music of domestic composers. Back in 1918, directed by the composer, the orchestra performed for the first time the Classical Symphony of Prokofiev. And in 1926 Shostakovich debuted his First Symphony in the Grand Hall of Philharmonia (conducted by Nikolay Malko).
In 1988 on the initiative of the orchestra,  Yuri Temirkanov became its principal conductor. Recently one Austrian critic eloquently indicated the result of the more than twenty-year collaboration: ”Temirkanov is a sorcerer on the podium, with a minimal gesture he reaches the maximum... Soft, homogeneous sound of strings is phenomenal as well as all the visual power of the orchestra, which, according to the last rating of Gramophone, is one of the the top twenty orchestras of the world. First class performing”. During recent years the group added a few more glorious pages to its history: a season opening in Carnegie Hall, a large-scale tour in Russia with the final concert on the Second Festival of the World's Symphony Orchestras in Moscow, the Russian première of the Polish Requiem by Penderecki under baton of the composer, premières of symphonies by Slonimsky and Tishchenko, performances of the most major works by Beethoven (9th Symphony), Verdi (Requiem), Orff (Carmina Burana) and Honegger (“Jeanne d'Arcu bûcher” (“Joan of Arc at the Stake”)).

Last season a new symphony by Segerstam (world première) and the Fifth Symphony by Grechaninov (Russian première) took place; the orchestra gave three concerts both in Paris’ Théatre des Champs-Elysées and in Vienna’s Musikverein; it opened the First International Rostropovich Week in Moscow and was the guest of Enescu Festival in Rumania and MiTo in Italy.

This season was opened by concerts in Annecy (France) on Crescendo Festival which was dedicated as well as the forthcoming Eleventh International Winter Festival “Arts Square” to the Year of Russia in France and the Year of France in Russia. The group will also go on tour in France (twice), Asia and USA. Highlights of the season will be: the Russian première of “Il canto sospeso” by Nono, written after fascism prisoner's dying notes and the Seventh Symphony by Schubert (Petersburg première within the bounds of the new monographic cycle). For the first time in our city the orchestra will present “The Snowman” ballet music and Violin concert by Korngold, “The Childhood of Christ” Christmas Oratorio by Berlioz and “A Mass of Life” by Delius. Also performed will be the Turangalila-Symphonie by Messiaen, excerpts from “The Martyrdom of St. Sebastian” mystery play and Russian première of “The Third and the Last Covenant” by Obukhov.
(the source: from the orchestra’s official website)