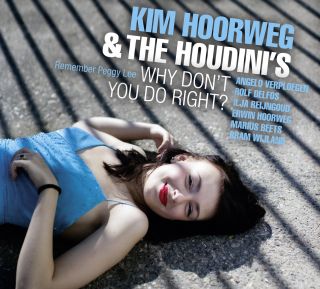 Why Don't You Do Right?

Catalog number: CR 73319
Releasedate: 02-09-11
An effortless merge of two generations, Kim and The Houdini’s. This really is a timeless combination. The Houdini’s have been around for almost a quarter of a century now. 25 years ago Kim wasn't even born yet! But, what is 25 years in music if you have Kim's talent and capacity of experience? Kim has really become one of the guys here and she and the sextet form a unity in rendering the timeless and beautiful repertoire of Peggy Lee.
The professional collaboration of The Houdini’s and Kim started a year ago with the theater show Fever – a Tribute to Peggy Lee. Instead of trying to redo Peggy Lee’s legendary performances, we had her versatile repertoire merely serving as a pool in which to find proper common ground for both parties’ musical satisfaction. Erwin had the arrangements done in no time and we had a ball playing the theaters and festivals. Time flew and here we are presenting the recorded outcome of an effortless merge of two generations. Kim and The Houdini’s, a timeless combination. We had a great time recording this album and we all sincerely hope you will have a great time listening to it. (part of the linernotes written by Angelo Verploegen)

Kim Hoorweg is a Dutch singer/songwriter. In 2007, at age 14 Kim was introduced on the North Sea Jazz Festival and the Heineken Music Hall with the Metropole Orkest. Being the youngest female artist on Verve at that time, she debuted with the album "Kim Is Back". Her second album "My Recipe For A Happy Life" with Candy Dulfer, Chance Howard and Trijntje Oosterhuis was released in 2009, with all songs of her own. In 2010 she was working on a Peggy Lee-project with the Houdini's , resulting in her Challenge Records debut album "Why Don't You Do Right" in september 2011.

The sextet The Houdini's has been around for almost twenty five years now and is one of the Netherlands' leading ensembles. Besides a heavy swinging groove The Houdini's also emphasize very dynamic, well-balanced ensemble playing. They recorded internationally released CDs on Timeless Records (Live At Paradox, Headlines, Kickin' In The Frontwindow), Challenge Records (Hybrid, Play The Big Five, Cooee, Live At Kiama Jazz Festival, Stripped To The Bone), Channel Classics (Porgy & Bess), Munich Records (Chasin' The General), Blue Note Records (Strange Fruit, with Trijntje Oosterhuis) and Social Beats Records (Unleashed and Remixed) The band toured Europe, the USA, Canada and Australia and did co-productions at the Amsterdam Concertgebouw with string orchestra Amsterdam New Sinfonietta conducted by Richard Dufallo; Schönberg Ensemble conducted by John Adams; Jazz Orchestra of the Concertgebouw conducted by Henk Meutgeert; Buster Keaton's silent movie The General. They have a good cooperation with singer-songwriter Kim Hoorweg, a real chemistry, and the sextet has done several concerts with Kim already with a Peggy Lee trubute. From that also a new album, on Challenge Records is born: " Why Don't You Do Right"