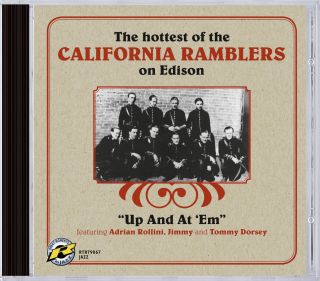 The California Ramblers were unusual for a top dance band in that they didn't have a designated arranger within their ranks, but instead relied on 'stock' arrangements supplied by music publishers. These stocks were amended to suit the band's instrumentation, and, in addition, hot arranged passages were often devised by the musicians themselves; such passages can be heard on many of the tracks on this CD. Some of these 'head arrangements' would have been worked out in the recording studio, such was the skill of the musicians, though others were undoubtedly rehearsed in advance. Rollini was himself an excellent arranger, as was the band's long-term pianist, Irving Brodsky.

By 1925, in addition to Adrian Rollini on bass sax (and sometimes piano and xylophone), the members of the band included Bill Moore (t), Tommy Dorsey (tb), Jimmy Dorsey and Arnold Brilhart (reeds), and a rhythm section consisting of Tommy Fellini (bj), Irving Brodsky (p) and Stan King (d). Bill Moore is of particular interest in that he was a light-skinned black musician who 'passed' for white. As such, he played with white groups throughout the 1920s, sometimes billed as "The Hot Hawaiian"! One of the other dance bands he played in the 1920s was that led by saxophonist Jack Pettis. Although such arrangements between black and white musicians in recording studios were not altogether unknown in the 1920s, they were certainly very unusual.

The roster of musicians inevitably changed over the years, and with some of the Ramblers recordings it is all but impossible to accurately ascertain who played on what titles. Fortunately, for the Edison sessions we have accurate personnels taken directly from Ed Kirkeby's own pay books and note books. Some of the names listed are unfamiliar indeed, and do not appear to have recorded with any other bands. Surprisingly, Arthur Hand never recorded with the Ramblers, according to Kirkeby; what is sometimes taken to be a violin is actually Arnold Brilhart playing an E-flat soprano saxophone. (By 1925, Arthur Hand had left the Ramblers. Variety of July 30, 1924 reported that "Arthur Hand, conductor of the California Ramblers, is one of the four heirs to $500,000 left to the family on the death of his father.")

Two major myths surround the California Ramblers band that recorded for the Edison record company in the mid-'20s. First, despite the fact that both Tommy and Jimmy Dorsey served tenures with the group, this was not the Dorsey Brothers' college band immortalized in their Hollywood biopic. Secondly, the group was not from California (by all reports they never even played in that state), but formed in Ohio by banjoist Ray Kitchenman in 1921.

The California Ramblers were one of the very first big bands on record to aim for dance music with strong jazz overtones. Although Paul Whiteman and Jean Goldkette (both of whom employed Bix Beiderbecke at various junctures) were mining this turf around the same period, their recordings sound almost quaint in comparison to the Ramblers. The band had a drumming dynamo in Stan King, an early playing partner of Benny Goodman's, whose rock-solid beat induced dancing. On bass saxophone was Adrian Rollini, a musical genius who could shine on multiple instruments. Add to this the aforementioned Dorsey brothers, Red Nichols, the straight-ahead rhythm of banjoist Kitchenman, and clarinetist Fud Livingston (comedian Jerry Colonna served a brief tenure with the band on trombone before finding his true leather-lunged calling) and you have a society dance band with real bite and verve. They also hold a parenthetical place in jazz history, hiring trumpet man Bill Moore, one of the first African American jazz musician to work with a white band. Although their time in the limelight was brief, with several of their members going on to bigger and better things by decade's end, the California Ramblers stand as the quintessential white dance band of the 1920s. (source: Allmusic.com)