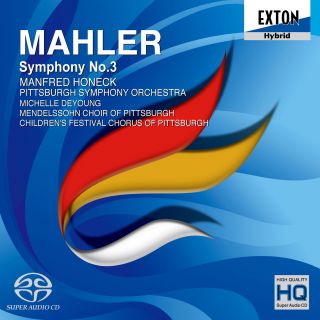 Catalog number: OVCL 450
Releasedate: 22-07-11
After successful releases of Mahler symphonies Nos.1 (EXCL-00026) and 4 (EXCL-00048), this is the third volume featuring the third symphony as one of the culminations of this live recording series. Mr. Honeck, one of the best interpreters of the composer in our time, born in Austria and cultivating his music basics in Vienna, finds this symphony as a history of the Creation composed by Mahler. With enthusiastic, dedicated support from the orchestra musicians, Mr. Honeck successfully depicts this extraordinary symphony leaving no one in the audience as well as with the CD untouched.
“Listening to Mahler's "Third" for the first time I was deeply impressed by the originality of the music. Today I am aware that there is much in this symphony that reminds me of my childhood, when I was allowed to spend my annual summer holidays on an idyllic Austrian Alp: the daily view of the impressive mountain tops, the lush green of the meadows, the breathtaking alpine flora, the way we used to fall asleep gently and naturally – there was no artificial light.    Dozing off, once in a while one could hear brass band from an inn far away.
These are never-to-be-forgotten reminiscences which I feel Mahler composed into the music. He does not miss any opportunity, at least not in the first three movements, to capture nature in both its boundless beauty and ferocity. Even the post horn solo in the third movement, very sensitively played in our recording by the superb George Vosburgh, fits into the idyllic world of nature with its simplicity and its common touch. Nevertheless it can also be perceived as a yearning pronouncement of man, admittedly still pure and
innocent. My father used to serenade me with similar popular tunes on the zither, an instrument rarely played nowadays.
Like Joseph Haydn who described the formation of the world in his oratorio "The Creation" from the representation of chaos up to the making of animals and man, Mahler composed a history of creation. [......]
There is a certain structure to the symphony and the individual movements display a certain form, although there is not much of the typical sonata form in the first movement. The "Third" is one of those symphonies where the analytical takes a backseat. Arnold Schönberg wrote a letter to Gustav Mahler after a performance: "Maybe it is more important after all to feel, relive and experience this symphony than to understand it fully." (by Manfred Honeck)


PITTSBURGH SYMPHONY ORCHESTRA For more than 100 years, the Pittsburgh Symphony Orchestra has been an essential part of Pittsburgh’s cultural landscape. The PSO, known for its artistic excellence, is credited with a rich history of the world’s finest conductors and musicians, and a strong commitment to the Pittsburgh region and its citizens. This tradition was furthered in fall 2008, when Austrian conductor Manfred Honeck assumed the position of Music Director with the Pittsburgh Symphony Orchestra. Heading the list of internationally recognized conductors to have led the PSO is Victor Herbert, Music Director between 1898 and 1904, who influenced the early development of the PSO. Preceding Herbert was Frederic Archer (1896-1899), the first Pittsburgh Orchestra Conductor. The Orchestra’s solidification as an American institution took place in the late 1930s under the direction of Maestro Otto Klemperer. Conductors prior to Klemperer were Emil Paur (1904-1910), Elias Breeskin (1926-1930) and Antonio Modarelli (1930-1937). From 1938 to 1948, under the dynamic directorship of Fritz Reiner, the Orchestra embarked on a new phase of its history, making its first international tour and its first commercial recording.

The PSO’s standard of excellence was maintained and enhanced through the inspired leadership of William Steinberg during his quarter-century as Music Director between 1952 and 1976. Andre Previn (1976-1984) led the Orchestra to new heights through tours, recordings and television, including the PBS series “Previn and the Pittsburgh.” Lorin Maazel began his relationship with the PSO in 1984 as Music Consultant but later served as a highly regarded Music Director from 1988-1996. As Music Director from 1997-2004, Mariss Jansons furthered the artistic growth of the orchestra, and upon his departure, the PSO created an innovative leadership model with Artistic Advisor Sir Andrew Davis, Principal Guest Conductor Yan Pascal Tortelier and Endowed Guest Conductor Chair Marek Janowski. These three conductors formed the primary artistic leadership for the Orchestra until January 2007, when the PSO selected Honeck to take the reins at the start of the 2008-2009 season. With a long and distinguished history of touring both domestically and overseas since 1900, the PSO continues to be critically acclaimed as one of the world’s greatest orchestras. With more than 34 international tours, including 18 European tours, eight trips to the Far East, and two to South America, a Far East Tour in 2002 marked first-time concerts for the Orchestra in Kuala Lumpur and Australia. Reaching a global audience, the PSO was the first American orchestra to perform at the Vatican in January 2004 for the late Pope John Paul II, as part of the Pontiff’s Silver Jubilee celebration. In May 2009, the PSO embarked on a four concert tour of Asia, a trip which included debut performances in Shanghai, China and Kaohsiung, Taiwan, in addition to the first stop in Beijing, China since 1987. Then in September 2009, the Orchestra toured Europe with stops in Essen and Bonn, Germany before closing the prestigious Lucerne Festival in Switzerland. International touring is made possible by the Hillman Endowment for International Performances.

Since 2006, the PSO has partnered with the Allegheny Conference on Community Development and its marketing affiliate, the Pittsburgh Regional Alliance, to use international tours to open doors for economic development and foreign direct investment discussions. The partnership, unique among American orchestras, has resulted in numerous investments in the Pittsburgh region.

The Orchestra also enjoys an equally distinguished record of domestic tours, which over the years have showcased the orchestra in all of America’s major cities and music centers, including frequent performances at Carnegie Hall in New York and the Kennedy Center in Washington, D.C. The PSO has a long and illustrious history in the areas of recordings and radio concerts. As early as 1936, the PSO broadcast coast-to-coast, receiving increased national attention in 1982 through its series of network radio broadcasts by Public Radio International, produced by WQED-FM 89.3 in Pittsburgh. Starting with the release of its first commercial recording in 1941, the PSO has made hundreds of critically acclaimed recordings. They are available on the PentaTone, EMI, Angel, CBS, Philips, MCA, New World, Nonesuch, Sony Classical and Telarc labels, and now on EXTON label. The orchestra with Lorin Maazel conducting and cellist Yo-Yo Ma, won a 1992 Grammy Award for a Sony Classical disc featuring works by Prokofiev and Tchaikovsky. Cinema Serenade, a CD with John Williams conducting and Itzhak Perlman performing celebrated film scores, reached No. 1 on the Billboard crossover chart. Since September 2008, the PSO has been working with Exton to produce a Mahler cycle.

MANFRED HONECK (conductor) Music Director of Pittsburgh Symphony Orchestra Manfred Honeck was appointed the ninth Music Director of the Pittsburgh Symphony Orchestra in January 2007, and began his tenure at the start of the 2008-2009 season. Also beginning in September 2008, he became the Principal Guest Conductor of the Czech Philharmonic Orchestra in Prague, and in 2007, assumed the post of Music Director of the Staatsoper Stuttgart. Honeck's second season as music director began with critically acclaimed tour performances in Essen and Bonn, Germany, as well as closing the prestigious Lucerne Festival in Lucerne, Switzerland.

Honeck also made his Carnegie Hall debut with the PSO in February 2010. Another major highlight is the BNY Mellon 2010 European Tour in May 2010 which leads Honeck and the Orchestra to various musical capitals including Paris and Vienna. Honeck has led the Orchestra in two recordings, Strauss's Ein Heldenleben and Mahler's First Symphony, released on the Japanese label Octavia/Exton. Both discs have been critically acclaimed. Born in Austria, Manfred Honeck studied music at the Academy of Music in Vienna. An accomplished violinist and violist, Honeck spent more than 10 years as a member of the Vienna Philharmonic and the Vienna State Opera Orchestra. It is his experience as an orchestra musician that has heavily influenced his conducting and has helped give it a distinctive stamp.    Honeck commenced his conducting career as assistant to Claudio Abbado at the Gustav Mahler Youth Orchestra in Vienna. Subsequently, he was engaged by the Zurich Opera House from 1991-1996, where he was awarded the prestigious European
Conductor's Award in 1993.

In 1996, Honeck began a three-year stint as one of three main conductors of the MDR Symphony Orchestra Leipzig, and in 1997, he served as Music Director at the Norwegian National Opera in Oslo for a year. A highly successful tour of Europe with the Oslo Philharmonic marked the beginning of a close collaboration with this orchestra, which consequently appointed him Principal Guest Conductor, a post he held from 1998-2004. From 2000 to 2006, Maestro Honeck was Music Director of the Swedish Radio Symphony Orchestra.
As a guest conductor, Manfred Honeck has worked with such major European orchestras as the Deutsches Symphonie-Orchester Berlin, Gewandhausorchester Leipzig, Bavarian Radio Symphony Orchestra, Sachsische Staatskapelle Dresden, Royal Concertgebouw Orchestra, London Philharmonic Orchestra, Orchestre Philharmonique de Radio France, Czech Philharmonic, and the Vienna Philharmonic, and in the U.S. with the Chicago Symphony Orchestra, Los Angeles Philharmonic, National Symphony Orchestra and Boston Symphony Orchestra.
In addition to his post at the Stuttgart Opera, operatic guest engagements include the Semperoper in Dresden, Komische Oper Berlin, Theattre de la Monnaie in Brussels and Royal Opera of Copenhagen, as well as the White Nights Festival in St. Petersburg and the Salzburg Festival. He appears regularly at Switzerland's Verbier Festival and has also been Artistic Director of the "International Concerts Wolfegg" summer music series in Germany for more than fifteen years.