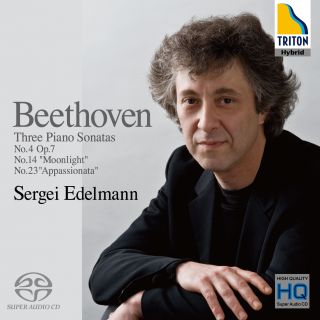 The first three of Beethoven’s 32 mature piano sonatas were published as a set, Op. 2, in 1796. But the next in the series, Op. 7, stands alone, and bears the designation “Grande Sonate”, in recognition of its ambitious scale and its element of virtuosity. The work was written in 1796 and ’97, while the first two piano concertos were also in progress, and published in 1797 with a dedication to the composer’s pupil Countess Babette von Keglevics. [......].

The two Sonatas which make up Beethoven’s Op. 27 were composed in 1801, between the First and Second Symphonies, and published in 1802. They must at one stage have been intended for separate publication, since they have different aristocratic dedicatees: the second is inscribed to Countess Giulietta (or Julie) Guicciardi, a young piano pupil of Beethoven whom for a short while he seems to have hoped to marry. But the two have the same sub-title, “Sonata in the manner of a fantasia”. In the case of No. 1, this indicates a novel combination of the multi-movement sonata and the much freer, continuous fantasia. No. 2, however, is in three complete and self-sufficient movements, albeit without a break between the first two. Its chief element of fantasy comes in the placing of a slow movement at the start, and in the unconventional nature of this Adagio, which prompted the work’s poetic nickname of “Moonlight” Sonata. [......]

Beethoven’s Op. 57 Sonata was written in 1804 and ’05, as part of an extraordinary sequence of masterpieces which also included the Eroica Symphony, the Triple Concerto, the Fourth Piano Concerto, the three “Rasumovsky” string quartets, the Fourth Symphony and the Violin Concerto. The work was published in 1807 with a dedication to the composer’s friend Count Brunsvik. It seems to have been the publisher who gave it its title of Sonata Appassionata; but Beethoven is not known to have demurred, and neither has anyone since, for there can be few more “passionate” sonatas in the repertoire. [......]
(from the CD linernote by Anthony Burton © 2011)

Sergei Edelmann
Born in Lvov, Ukraine in 1960, Sergei Edelmann comes from a long and outstanding musical heritage; his father, Alexander Edelmann, renowned pianist and pedagogue, a pupil of both Felix Blumenfeld (professor of Vladimir Horowitz) and Heinrich Neuhaus (professor of Sviatoslav Richter) taught Sergei since the age of 5. In his native country, Sergei’s first orchestral performance was at the age of 10 playing Beethoven’s First Piano Concerto. He subsequently performed extensively in recitals and with orchestras throughout ex-USSR. Sergei Edelmann came to the United States in 1979. Within his first year here, he quickly established himself as a significant and highly acclaimed pianist of his generation. Not long after his debut performance in the United States, one of Los Angeles’s major concert critics described the excitement generated by Sergei’s performance: “Music reviewing, as a profession has its perils, but one of its rewards is the shock of unexpectedly stumbling onto great talent. That happened last night when this young pianist, Sergei Edelmann, gave a recital to our full house audience”. And, after his debut recital in Chicago’s Orchestra Hall, one of the most respected and feared musical critics, Claudia Cassidy, wrote in the Chicago Magazine: “Sergei Edelmann walked in the Orchestra Hall a stranger and out of it one to be cherished”. Sergei Edelmann has since become a leading artist both in the concert hall and in the recording studio.

His BMG Classics/RCA Red Seal CDs with the Bamberg Symphony under the baton of Claus Peter Flor and the Stockholm Philharmonic Orchestra with Paavo Berglund include both Mendelssohn concertos and the Strauss Burlesque, and his series of solo recordings of Beethoven, Schubert, Schumann, Chopin, and Prokofiev, have gathered enthusiastic critical acclaim. His solo recitals in the United States have included Chicago’s Orchestra Hall, New York’s 92nd Street “Y” and Metropolitan Museum of Arts, Pasadena’s Ambassador Auditorium among numerous others. In Europe he has performed in Paris, Amsterdam, Brussels, Madrid, Munich, Detmold, Frankfurt,Milan, Turin, Ferrara and in Asia he regularly appears in Tokyo, Taipei and Seoul. Mr.Edelmann has appeared with the Cleveland Orchestra, American Symphony Orchestra at the Carnegie Hall, the London Symphony Orchestra, the Orchestre de Paris, the Washington National Symphony Orchestra (at the invitation of Mstislav Rostropovich), the Toronto Symphony, the Dallas Symphony, Jerusalem Symphony, Haifa Philharmonic Orchestra, Mexico Philharmonic, Orchestra National de Buenos Aires in Teatro Colon, Saint Louis Symphony, Buffalo Philharmonic, Seattle Symphony, Orchestra Verdi in Milano with Vladimir Yurovsky, the Rotterdam Philharmonic with Valery Gergiev, the Maggio Musicale Festival of Florence, tour of Italy with Moscow Soloists under Yuri Bashmet, the National Symphony of Johannesburg and the Cape Town Philharmonic in South Africa and other major orchestras across Europe, the Far East, and North and South America.

In France he has appeared in La Rocque d’Antheron, Tours, Dinard, Nancy, Sully and Radio France Montpelier music festivals. He is a regular guest at the Elba International Music Festival in Italy where, over several summer seasons Mr.Edelmann has collaborated with violist Yuri Bashmet, violinist Victor Tretyakov and cellist Mario Brunello. They premiered in Italy Gya Kantcelli’s Piano Quartet and Penderezky Sextet. In September of 2006, at the opening of 10th anniversary Festival, he performed the Schumann piano concerto with “New Russia” Symphony Orchestra conducted by Yuri Bashmet. Following that concert, Mr.Edelmann performed in the Mozart celebration concert with Moscow Soloists at the famed Great Hall of the Moscow Conservatory in December 2006.