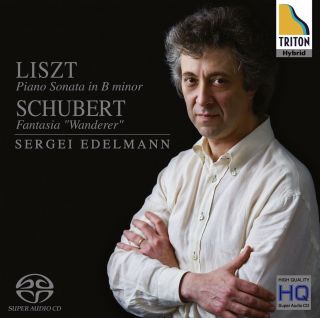 Liszt was the supreme nineteenth-century master of the piano, and in many of his works pushed the technical and sonorous possibilities of the instrument to new extremes. His most important single composition for solo piano, and perhaps his greatest masterpiece, is the Sonata which he completed at Weimar in February 1853. It was published the following year, with a dedication to Robert Schumann, who had dedicated his Fantasy to Liszt some fifteen years earlier. But it was slow to gain approval, receiving only private performances – including one given to Richard Wagner, who found it “beautiful beyond belief” – before it was finally played in public in Berlin in 1857 by Liszt’s pupil (and later that year his son-in-law) Hans von Bülow. That premiere was coolly received, and for some years after it the work continued to baffle audiences and many musicians; it was not firmly accepted into the repertoire until well into the twentieth century.
The main stumbling-block to appreciation of the Sonata must have been its unconventional form. It consists of a single movement lasting over half an hour, in a greatly expanded sonata-form scheme, incorporating a slow movement and a fugal scherzo, and all derived from no more than a handful of themes. It is in some ways the pianistic equivalent of the orchestral symphonic poem, a form of which Liszt was the pioneer – with the significant difference that it has no stated programme. Commentators have attempted to match it to various narratives, including the legends of Faust and of the Garden of Eden. But Liszt was not normally shy about attaching programmes to his music, so we must conclude that he wanted the Sonata to be heard as an abstract composition – or at least, in view of its intense expressivity, as a projection of personal states of mind to which a story-line cannot readily be attached. […..]
One of the few models for Liszt’s conflation of four movements into a continuous and unified whole was the Fantasy in C major by Schubert, which Liszt had frequently included in his solo recitals in the later 1840s, and had arranged for piano and orchestra in 1851. The Fantasy may initially have appealed to him as Schubert’s only solo piano piece to have been conceived as a virtuoso showpiece. (Schubert himself had only a modest technique: there is a story that when he attempted to play through the Fantasy, he gave up, exclaiming “Let the devil himself play it!”) The work was written in November 1822 – around the same time as the Unfinished Symphony – for a wealthy patron named Emanuel Karl Liebenberg de Zsittin, who had been a pupil of the pianist-composer Hummel. Liebenberg presumably also paid for the work’s publication in 1823. [……]
(from the CD linernote by Anthony Burton © 2011)


Sergei Edelmann
Born in Lvov, Ukraine in 1960, Sergei Edelmann comes from a long and outstanding musical heritage; his father, Alexander Edelmann, renowned pianist and pedagogue, a pupil of both Felix Blumenfeld (professor of Vladimir Horowitz) and Heinrich Neuhaus (professor of Sviatoslav Richter) taught Sergei since the age of 5. In his native country, Sergei’s first orchestral performance was at the age of 10 playing Beethoven’s First Piano Concerto. He subsequently performed extensively in recitals and with orchestras throughout ex-USSR.

Sergei Edelmann came to the United States in 1979. Within his first year here, he quickly established himself as a significant and highly acclaimed pianist of his generation. Not long after his debut performance in the United States, one of Los Angeles’s major concert critics described the excitement generated by Sergei’s performance: “Music reviewing, as a profession has its perils, but one of its rewards is the shock of unexpectedly stumbling onto great talent. That happened last night when this young pianist, Sergei Edelmann, gave a recital to our full house audience”. And, after his debut recital in Chicago’s Orchestra Hall, one of the most respected and feared musical critics, Claudia Cassidy, wrote in the Chicago Magazine: “Sergei Edelmann walked in the Orchestra Hall a stranger and out of it one to be cherished”.

Sergei Edelmann has since become a leading artist both in the concert hall and in the recording studio. His BMG Classics/RCA Red Seal CDs with the Bamberg Symphony under the baton of Claus Peter Flor and the Stockholm Philharmonic Orchestra with Paavo Berglund include both Mendelssohn concertos and the Strauss Burlesque, and his series of solo recordings of Beethoven, Schubert, Schumann, Chopin, and Prokofiev, have gathered enthusiastic critical acclaim.

His solo recitals in the United States have included Chicago’s Orchestra Hall, New York’s 92nd Street “Y” and Metropolitan Museum of Arts, Pasadena’s Ambassador Auditorium among numerous others. In Europe he has performed in Paris, Amsterdam, Brussels, Madrid, Munich, Detmold, Frankfurt,  Milan, Turin, Ferrara and in Asia he regularly appears in Tokyo, Taipei and Seoul.

He is a regular guest at the Elba International Music Festival in Italy where, over several summer seasons Mr.Edelmann has collaborated with violist Yuri Bashmet, violinist Victor Tretyakov and cellist Mario Brunello. They premiered in Italy Gya Kantcelli’s Piano Quartet and Penderezky Sextet. In September of 2006, at the opening of 10th anniversary Festival, he performed the Schumann piano concerto with “New Russia” Symphony Orchestra conducted by Yuri Bashmet. Following that concert, Mr.Edelmann performed in the Mozart celebration concert with Moscow Soloists at the famed Great Hall of the Moscow Conservatory in December 2006
.
In January 2008 Mr.Edelmann was invited to be a soloist in J.Brahms Piano concerto No.2 with Sinfonia Warsovia under the direction of Peter Csaba for the tour of Italy.
Other leading artists he has collaborated with include conductors Franz Paul Decker, Valery Gergiev, Claus Peter Flor, Lawrence Foster, Hans Graf, Gunther Herbig, Raymond Leppard, Yoel Levi, Vladimir Yurovsky, Eduardo Mata, Gerard Schwarz, Peter Csaba, Lawrence Leighton Smith, Semyon Bychkov, Catherine Comet and Maxim Shostakovich.

In addition to his concert activities, Mr.Edelmann devotes a considerable amount of his time to teaching. He was a Professor of the Piano Faculty at New York University from 1996 to 2001 and currently is a Guest Professor of Piano at the Musashino Music Academy in Tokyo until March 2009.