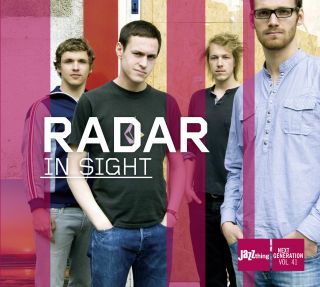 Catalog number: DMCHR 71102
Releasedate: 03-02-12
Extremely relaxed: this best describes the composition and interpretation on "In Sight". And this convinced the jury of the series of 'Jazz thing Next Generation' to invite the band to be part of the series. A series that is well known for picking the best upcoming artists, and is after 8 years and 40 releases the most successful of its kind.
Extremely relaxed: this best describes the composition and interpretation on "In Sight". The four young guys from RADAR have produced a mature work with "In Sight", which forms an absolutely intrinsic whole. You can also bring to mind when listening that these are not old hands playing, but that "In Sight" is actually the debut album of the young Berlin quartet RADAR. With a matter-of-factness, they present their own style; slight digressions in the direction of classical fugue or Latin as light as a feather always take a proper place in their pure and original overall sound. The legendary microphone manufacturer Neumann, belonging to the Sennheiser Group in the meantime, also perceived it similarly. They are supporting the studio production of RADAR with their microphones and euphoria. Professor Johannes Enders was also glad to play as second saxophonist alongside Timo Vollbrecht on four of the eight pieces. RADAR also gives concerts in social institutions in Berlin such as workshops employing disabled persons and prisons as scholarship recipients of the association "Yehudi Menuhin: Live Music Now Berlin". The four improvisers from RADAR define their leitmotif as follows: "Eight pricked up ears go on a common journey full of interaction and openness for the unknown."  You would like to add: …and they are as sly as they come with these ears.

RADAR considers itself the democratically structured, main project of four musicians. However, Timo Vollbrechts' work as composer deserves special acknowledgment. The way in which he succeeds in making his pieces seem brand new and never previously heard, but at the same time lets them seem quite familiar is remarkable. Timo studied composition under Guillermo Klein in Barcelona for eight months, among other places and teachers. He was awarded a Masters' degree with the major of jazz saxophone from New York University (his teachers were Mark Turner and Joe Lovano) in the middle of 2011.
If both of your parents are certified ecclesiastic musicians, you simply grow up with music. Pianist Lorenz Kellhuber was already a student at the young age of 11 at the College of Catholic Ecclesiastic Music and Music Pedagogy in Regensburg. He began his piano studies in 16 (in 2006) at the Jazz Institute Berlin.
Moritz Baumgärtner also has musician parents. His father is a classical violinist, and his mother a concert pianist. He found drumming on kitchen utensils too boring when he was nine and started taking drum lessons. He was certainly a good student, because he won his first "Young People Play Music" award three years later. After receiving many other awards and music encounters with Ack van Rooyen and Emil Mangelsdorff, he started studying at the Jazz Institute Berlin in 2005.
Contrabassist Tim Kleinsorge has been playing trumpet and e-bass since he was 12, but only starting playing jazz during his studies at Leipzig Music College. He then switched to the contrabass and the Jazz Institute Berlin. In Berlin, he was also immediately able to perform with musicians such as David Friedman and Peter Weniger.