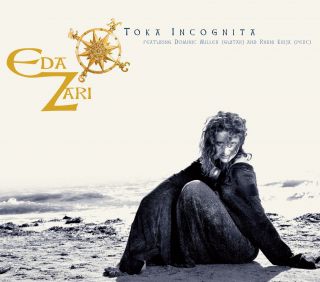 Born in Tirana, as a child Eda Zari experienced the last years of the paranoid dictator Enver Hodscha before she came as young woman to Germany. Music was already her passion when she was a child. "I sang long before I could speak," she disclosed. The foundation for her passion was laid early enough with that. Her studies in classical singing in Cologne refined her technique, but could not drown out her love of the music of her native country. However, she also discovered a new passion: jazz with all of its rhythmic and harmonic possibilities as well as its freedom of articulation and phrasing, the epitome of a lucky coincidence of a fine mixture. As a result, a few recordings were already made (e.g., "Statement", Intuition 2004), which received outstanding reviews and justified Eda Zari's reputation as the most important German-Albanian voice.  She has performed since then in places ranging from New York (Blue Note, among others) to Sao Paolo, from Cologne (Philharmonic) to Algeria, and from Cyprus to France. And of course time and again in her native city of Tirana. She has performed on the stage with numerous international stars, and she still has contacts today with members of Sting's band. Dominic Miller, guitarist from Sting, among others, can be heard on the acoustic guitar on three songs, and the percussionist from Sting, Rhani Krija, can even be heard on all pieces. Gert Kapo plays piano and also contributed his own compositions and arrangements as well as acting as co-producer. No one less than Sebastian Studnitzky, the "sound esthete" (FAZ), plays trumpet, who created a sensation with his own band, but also alongside of Nils Landgren, among others, and in "Jazzanova". The contrabass is played by the whiz kid of German bass players, Martin Gjakonowski, which he handles in his usual manner: with composure, precisely and a lot of sensitivity.  The Siberian player of many instruments Vladiswar Nadishana adds the unusual sounds of bansuri flute, futujara, dzuddahord and a few others. Hayden Chisholm (saxophone) can also be heard on one piece, and Fatmir Ilamaj (clarinet), Jochen Vogel (harp), Mark Joggerst (piano), Marc Oberländer (guitar) and Ahmed Eid (bass) enhance the sound worlds on other pieces. Finally, you also hear a good string quartet in three songs.