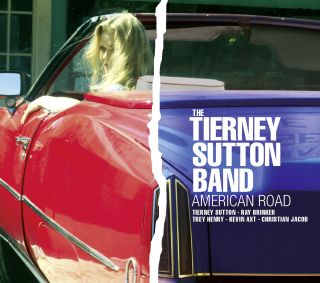 Catalog number: CR 73329
Releasedate: 11-11-11
Having spent countless days and nights traveling America’s roads and playing in her towns and cities, the Tierney Suttun Band brought this great new album to fruition. All of the arrangements on American Road were conceived by the entire band, which, said The New York Times, has “refined the kind of rapport that could only be achieved over time…providing a continuous flow of support, strength and inspiration.” Indeed, as American Road unfolds, each piece of the travelogue reveals nuances and depths previously unexplored.
For their ninth album, the Grammy-nominated vocalist and her band of 18 years leave preconceptions in the dust, taking instantly familiar, American-born compositions, deconstructing them and presenting them anew in their own inimitable way. After hearing the Tierney Sutton Band’s take on these cornerstones of the American lexicon, it may be impossible to imagine them performed any other way.

“We first started looking at an ‘America’-themed CD three or four years ago,” says Sutton, whose vocal style has been described as “soft as silk and smooth as fine bourbon” by the Chicago Sun Times. Circumstances led the group in a different direction at the time, the result being 2009’s Desire, which earned the group its third consecutive Grammy nomination for Best Vocal Jazz Album.

But the concept that gave ultimately gave rise to American Road stayed with Sutton and the band—Christian Jacob (piano), Kevin Axt (acoustic and electric bass), Trey Henry (acoustic and electric bass) and Ray Brinker (drums and percussion)—until, having spent countless days and nights traveling America’s roads and playing in her towns and cities, they were able to finally bring it to fruition. All of the arrangements on American Road were conceived by the entire band, which, said The New York Times, has “refined the kind of rapport that could only be achieved over time…providing a continuous flow of support, strength and inspiration.”

In a recent interview with the Digital Jazz News blog, Sutton summed up her experience making the album. The music, she said, “sort of flowed out of us, and, she added, “We walked out of the studio feeling that it is our best work to date.”


The Tierney Sutton Band celebrated its 3rd consecutive Grammy Nomination for "Best Vocal Jazz Album". During a collaboration that has spanned 18 years, they have also been awarded a JazzWeek Award for Vocalist Of The Year, consecutive nominations for Jazz Journalist Association awards,  recorded several #1 Cds on jazz radio, and garnered critical praise throughout the world. Comprised of acclaimed vocalist Tierney Sutton and instrumental virtuosos Christian Jacob, Trey Henry, Kevin Axt and Ray Brinker, the band is an incorporated partnership and a model of both musical and business unity. Members of The Tierney Sutton Band have played and recorded with a diverse array of music legends including Ray Charles, Natalie Cole, Placido Domingo, Bonnie Raitt, James Taylor and countless others, yet the Tierney Sutton Band has demanded and received their commitment for almost 2 decades. They have headlined in recent years at Carnegie Hall, The Hollywood Bowl, The Kennedy Center and Jazz at Lincoln Center and have recorded 8 CDs to increasing recognition and acclaim. The Band's Album "On The Other Side" has been called by BusinessWeek "A Masterpiece ...eloquent, honest and magnificently sung and played."  and the band's most recent CD, "Desire", has been described by The Chicago Sun Times as "a conceptual masterpiece."