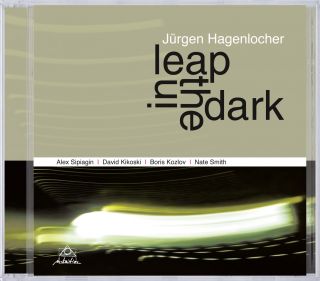 Leap In The Dark

Catalog number: INTCHR 71308
Releasedate: 01-03-12
All in all, an American "All-Star Ensemble", which expresses its great respect for the playing of a young German tenor saxophonist with a recording that reminds us rightly of the great CDs of the last decade.
There are not many European jazz musicians who can deal respectfully with jazz steeped in American tradition and know how to interpret it in their own style at the same time. One person who has dedicated himself to so doing with heart and soul is Jürgen Hagenlocher. He calls his new CD "Leap In The Dark" for a good reason. This leap into the unknown was worth the effort. Getting involved in the unknown and developing music from different viewpoints and backgrounds contains a certain amount of risk, but it can also produce an extremely inspiring and exciting result as is the case here.

Each piece tells its own story and fascinates thanks to an authentic New Yorker sound – modern jazz to savor with all your senses. "Leap In The Dark" is proof in sound for a fact that applies unchanged: jazz is created when a group of experts with a lot of shared experience uses the space provided as kindred spirits and on the basis of a well-developed art of composition to structure and adorn that space. When the leader also has a very special gift of selecting his fellow musicians in such a way that they fit into his idea of sound as a matter of course, then music becomes an event.

Jürgen Hagenlocher, born in 1967, studied at Swiss Jazz School in Bern and won various prizes at an early age. He has not only played at numerous festivals and clubs since then, but can also be heard on almost a dozen recordings. His third CD (following "Episodes" in 2007 and "Confusion" in 2009) solidified his reputation (which his two CDs had already established) and which attracted the attention of many of his fellow musicians (Ack van Rooyen:  "a superbly arranged, soulfully executed venture" and Randy Brecker: "a first rate CD, great playing and compositions"). He plays regularly in New York where the new CD was also recorded with colleagues, with whom he has already been playing for years and who will also accompany him on a European tour in 2012.
Alex Sipiagin has already been playing with Hagenlocher for four years, including on tours in Europe. He was born near Moscow in 1967, but already moved to New York in 1991 and soon had notable gigs (Gil Evans Band, George Gruntz Concert Jazz Band, Gil Goldstein, Bob Moses Band, etc.). He has been playing in various bands of Dave Holland for 10 years, but he has also been a member of the Mingus Big Band and the Mingus Dynasty for quite some time.
He also plays along regularly with Boris Kozlov there, who not only gets to play the original bass from Mingus as a permanent loan, but has also received two Grammy Awards as music director of the Mingus Big Band. He also shares the same birth year, birth place (Moscow) and time of moving to the USA with Sipiagin as well as the fact that he can also show an impressive list of fellow musicians who time and again request his services: from McCoy Tyner to Maceo Parker. He can be heard on 160 CDs in the meantime!
On the other hand, David Kikoski was born in New Jersey in 1961 and moved to New York earlier after studies at Berklee (alongside of Pat Metheny, among others, with whom he can be heard on a CD recorded later). He was already an established name on the keyboards in the middle of the 80s, which performances and (more than 100) CD productions with John Scofield, Joe Henderson, Dave Holland and Marcus Miller, among others, demonstrate.
The youngest of Hagenlocher's sidemen Nate Smith (born 1974) showed his talent at an early age. He already played in the band of Betty Carter when he was a student, and later in various bands of Dave Holland – as Alex Sipiagin did – and Chris Potter. He can also be heard on the CDs of Jason Moran, Craig Taborn and Joshua Redman.