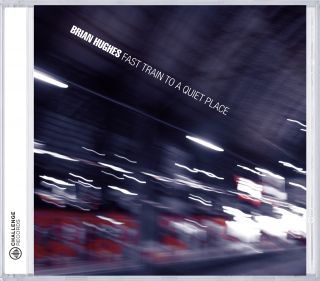 Fast Train To A Quiet Place

Catalog number: CR 73334
Releasedate: 27-10-11
One of Contemporary Jazz’s foremost guitarists and composers releases his finest album to date on this October 2011 release.  The album includes the first single Fast Train along with nine other Hughes originals and features an all-star lineup.
The train gets rolling with the bustling and percussive, stop and start motion that drives the opening track and first single “Fast Train,” which builds slowly towards a blistering, hypnotic crescendo. The sensual and dreamy “Blanket of Stars” was inspired by Hughes walking out of the studio looking up at the sky on a perfect night in his hometown of Altadena, California. The quirky working title of “Would You Like Fries With That My Dear?” somehow stuck to a sizzling track that spins bossa nova into such a frenzy that Hughes began to call the vibe “Rockanova.” After the blues tinged tropical romance of “You & I,” Hughes ventures into spy movie territory with the cool and bluesy, samba/boogaloo piece “Gotcha.” Rodhe brings out the classic soul-jazz via the Hammond B-3 on the funked out “Super Tight,” which features Hughes’ bright, blistering electric guitar. The inspiration for the title of the acoustic driven flamenco jam “Café Sin Nombre” is the place in Sevilla where flamenco is supposed to have originated. Fast Train To A Quiet Place wraps with a three songs with roots in very different places. Following an exotic venture to India via a romp on the electric sitar on the moody, atmospheric “The Gift,” Hughes goes “To A Quiet Place” with a graceful interlude on the bouzouki. He then heads back home—down home—for a fiery, anthemic electric guitar driven gospel explosion appropriately named “Hallelujah.” Jonathan Widran
Los Angeles resident Brian Hughes has carved out an impressive career in the contemporary jazz arena. His first two albums, Between Dusk and Dreaming and Under One Sky, firmly established him as one of the foremost guitarists and composers in the genre, perfectly blending his fluid and emotive guitar style into an exciting, melodic mix of Latin, Jazz and World Music compositions. After being picked as a winner in JAZZIZ Magazine's "Guitars On Fire" competition his subsequent recordings Straight To You, One 2 One, Shakin' not Stirred, Along the Way, Live and the concert DVD No Reservations have received critical acclaim and major radio air play from coast to coast. With his sizzling fret work and infectious compositions the media are accurate in saying: "Both a great artist and an accessible one. His passion is so obvious, intense and contagious, that his audience shares it.” Brian has received the SOCAN / BMI "Jazz & Instrumental Composer of the Year" award seven times from 1997 to 2011 and the title track from “Shakin? Not Stirred” was featured on an episode of HBO's “Sex and the City”.

Hughes is well known for his 24 year parallel career recording and touring with world renowned vocalist Loreena McKennitt (The Mummer's Dance). Brian's skills as a musician (guitars, oud, bouzouki) and his production talents are evident on her recent platinum recording “The Wind That Shakes the Barley”, the concert DVD “Nights From The Alhambra”, filmed in Granada, Spain and her past eight multi-platinum recordings. Brian has toured the world several times with Loreena, appeared on the "Late Show" with David Letterman and received a Juno (Canadian Grammy) nomination as "Producer of the Year” for his work on her platinum selling album “The Visit”.