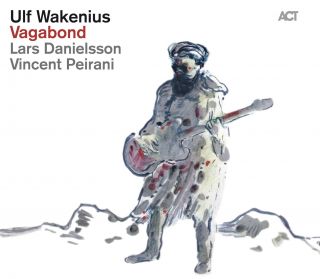 Catalog number: ACT 95232
Releasedate: 27-01-12
On Vagabond it becomes apparent that Wakenius the globetrotter is driven by a curiosity for all sorts of music, and he proves himself once again to be a truly versatile guitarist. From the French “Bretagne” to the Nordic tones of “Psalmen”; from archaic Native American tones of “Witchi-Tai-To” to the Far-Eastern influences present in “Song For Japan”, Wakenius sends the listener musical postcards from all over the world.

Jazz musicians could add ‘travellers’ to their job description - since being on tour is an indispensable part of a successful career, in a sense jazz musicians are descendents of vagabonds and wandering people.

These thoughts also crossed Ulf Wakenius‘ mind when he named his new album Vagabond. After all, he has travelled around the globe several times; in the early ‘80s he toured all over the world with Guitars Unlimited, a guitar duo with Peter Almqvist. In between he stayed in Brazil and played with some of the country’s most prominent local musicians. After that he continued performing in concert halls and jazz clubs around the world – for years Wakenius worked together with Ray Brown and the bassist Niels-Henning Ørsted-Pedersen, with whom he even played for the former US president Bill Clinton. He has performed in concert with stars like Herbie Hancock, Toots Thielemans, Hank Jones, Pat Metheny and Michel Legrand. Particularly worthy of mention is Wakenius’ 11-year membership in the legendary Oscar Peterson Quartet until its leader’s death in December 2007.

Furthermore, for a couple of years Wakenius has been the accompanist of his fellow ACT artist Youn Sun Nah. Since the Korean star singer lives in Paris, the metropolis on the Seine, with its many jazz clubs and extraordinary versatile music scene, has been a regular destination for him. Moreover, it also became the source of inspiration for Vagabond: in addition to guest appearances by Nguyên Lê and Youn Sun Nah, who performs a version of the Police classic “Message in a Bottle” with remarkable simplicity, it was Paris, where he met the accordionist Vincent Peirani, which shaped the album.

In 2003 Peirani made a much-noticed performance at the La Défense Jazz Competition when he was still a student at the Paris Academy of Music, and he has been a staple of the jazz scene in Paris ever since. Performances with Michel Portal, Renaud Garcia-Fons, Daniel Humair and Louis Sclavis, or with his own projects, such as in duet with Vincent Lê Quang, with a rock quartet or a world music quintet, as well as in the fields of chanson and classical music with artists like François Salque, Laurent Korcia, Roberto Alagna or André Minvielle – all this has proven that Peirani can be considered the rising star of the great French accordion tradition, with such famous representatives as Richard Galliano.

On Vagabond Peirani demonstrates that he has already found a unique style that works in different genres and perfectly fits Wakenius’ guitar. His accordion occasionally mimics the sound of a human voice, as heard most clearly on “Breakfast in Baghdad” - originally composed by Wakenius for Youn Sun Nah and featured on her album Same Girl (ACT 9024-2).

Wakenius‘ previous albums on ACT have been focused on one theme. On Notes from the Heart he interpreted Keith Jarrett’s music, and on Love is Real he centred on Esbjörn Svensson. On Vagabond it becomes apparent that as a globetrotter Wakenius is driven by curiosity for all sorts of good music and he proves himself as a truly versatile guitarist - from the French “Bretagne” and the Nordic and almost hymnal sounds of “Psalmen” by his friend and fellow musician Lars Danielsson, to archaic Native American tones of Jim Pepper’s “Witchi-Tai-To”, and from the South American “Chorinho” to the Asian sounding “Song For Japan”. Wakenius sends the listener musical postcards from all over the world and merges them into a fascinating travel report.

The album is also a family affair. For the first time Ulf Wakenius worked together in the studio with his son Eric, who is obviously following in his father’s footsteps as a guitarist, as heard on the title song that they composed together. In addition, they perform Attila Zoller’s wonderful “Birds And Bees” as a duet. Wakenius sums up by saying, ”It’s the best album I have ever made.”

The ACT recording artist Ulf Wakenius has held for the last ten years one of the most coveted gigs in jazz: he was the “fourth man” in the Oscar Peterson quartet up until Peterson’s death in December 2007. His predecessors have been such greats as Barney Kessel, Herb Ellis, and Joe Pass. He has performed at such classic jazz venues as Carnegie Hall, the Hollywood Bowl, the international Blue Note clubs, and recently played sold out shows with Oscar Peterson at the Royal Albert Hall, Chicago Symphony Hall, Palais des Congrès, Wiener Konzerthaus, Massey Hall, Teatro Colon-Buenos Aires, Stravinsky Hall-Montreux and Tokyo International Forum Hall. His latest concert with Oscar Peterson at Monterey International Jazzfestival was filmed by Clint Eastwood.

He has recorded two CDs, for Telarc with the great Ray Brown: "Seven Steps To Heaven" which became number one in the U.S. jazz charts, and "Summertime" which was voted as one of the top ten albums of `98 in America.

In 2003 he performed in a highly successful duo concert with Pat Metheny at Jazz Baltica in Germany. The concert was also televised on German TV.

In 2005 Ulf Wakenius has become an exclusive ACT recording artist with two albums under his name. He took on the music of Keith Jarrett for his hihgly acclaimed ACT debut album Notes From The Heart (ACT 9435-2).

In considering Wakenius’ new project, Love Is Real (ACT 9459-2) one inevitably comes back to the Jarrett recording. Once again bassist Lars Danielsson and drummer Morten Lund build the framework for the rhythm section, this time complemented by Lars Jansson on piano. Once again Wakenius devotes himself to the music of a particular pianist; and again it’s a melody-driven player who fits a very particular image: his fellow countryman Esbjörn Svensson of e.s.t.

Ulf Wakenius was born in Halmstad, Sweden on April 16, 1958. He began playing the guitar at the age of 11, inspired by other guitarists in the neighbourhood of his new hometown, Gothenburg.

After picking up the guitar, Ulf never looked back. In the beginning, he was inspired by virtuoso electric-blues guitar players, but soon moved to more jazz-orientated music. John McLaughlin became Ulf's new guitar hero. (John later wrote liner notes for one of Ulf's solo-albums).

At the age of 17 Ulf was already established as a jazz musician playing with different Swedish groups. During the following years, he toured all over Europe. In the beginning of the 1980s, Ulf founded the duo "Guitars Unlimited" together with Peter Almqvist. They toured in many parts of the world and appeared frequently on Swedish television. The highlight of their career was a performance in the 1985 Melody Grand Prix, a historic event that was seen by 600 million viewers (probably the largest audience a jazz-guitar duo has
ever had).

In the mid-1980s, Ulf also received the opportunity to record a solo album in Rio de Janeiro, Brazil. He was fortunate to be able to assemble a band with such fantastic musicians as Sivuca, Luizao, Paolo Braga (Elis Regina), Nico Assumpçao (Milton Nascimento) among others. The record became a hit in Sweden with considerable airplay. The "Brazil venture" was the beginning of a life-long love of the Brazilian culture. Later Ulf returned with Oscar Peterson and performed for an audience of 35,000 people in Sao Paolo.

In the late 1980s, Ulf began playing with the late great Danish bass giant Niels-Henning Ørstedt-Pedersen. Their collaboration was very fruitful, resulting in concerts all over the globe, several recordings, playing for the then-President of the United States, Bill Clinton, and numerous international TV-shows. In 2007 ACT released The Unforgettable NHØP Trio Live (ACT 9464-2) with Ulf Wakenius on guitar and Jonas Johansen on drums which features the legendary musician’s last live recordings and is a unique reminder of a true jazz great.

In the early 1990s, Ulf started to work in different projects with top American and European musicians. The group Grafitti was formed with the rhythm section from the John Scofield group, the members being the phenomenal drummer Dennis Chambers (now with Santana), bassist Gary Grainger, Håkon Graf on keyboards and Ulf on guitar. They toured in the United States and Europe and recorded a CD, which was very well received. He also started a collaboration with bass-icon Ray Brown. Ulf has 11 solo albums to his name and has recorded several albums as a sideman together with many jazz leg